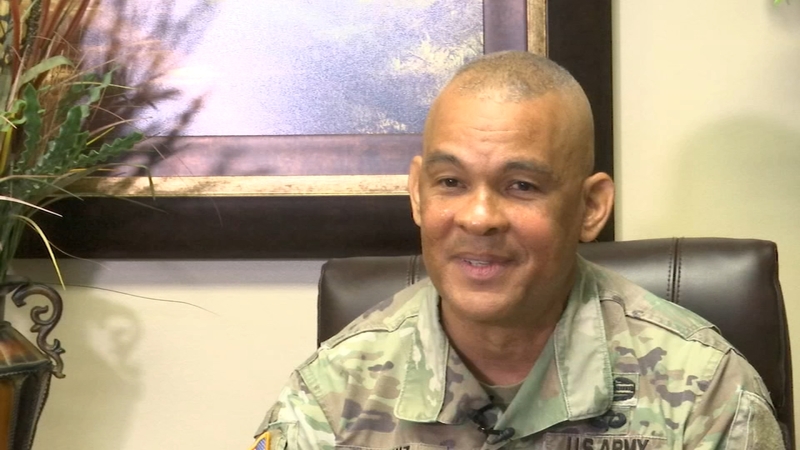 FORT BRAGG (WTVD) -- The sky continues to be the limit for one soldier at Fort Bragg who has had quite the 23-year journey.

Staff Sgt. Carlos Muniz, at the age of 32, decided to pack his bags and leave his family in Puerto Rico with the intention of joining the military.

"I started seminary to be a pastor, and I decided to serve God in the military," Muniz said.

55-year-old Muniz said the move was difficult to make because he couldn't speak English.

In preparation to become an officer, Muniz was sent to a language school out of San Antonio, Texas, where he felt overwhelmed with loneliness and frustration at times.

"At some moment, I made it. But, I went to the corner and cried and I never forgot that," Muniz said.

10 weeks later, Muniz completed the language classes and was transferred to South Carolina for basic training, eventually being stationed out of Fort Bragg.

Muniz overcame the challenge with years of questions and watching TV in English with Spanish subtitles.

Over time, Muniz was stationed all around the world including: South Korea, Italy and even Germany.

"Having two languages makes you very handy to help others in different ways," Muniz said.

Muniz recalls a time where he was in Bolivia with his team and was the only one who could communicate with the locals.

However, the challenges didn't stop at language. The staff sergeant also experienced his fair share of discrimination for the color of his skin.

"People have different mentalities and you need to respect that. Then, I just leave them alone and try not to argue with them," Muniz said.

But it's Muniz's hard work, devout faith and love for every human being that his colleagues say make him so unique.

"He wants to be able to hear people, so I feel like he very much cares about where he's at and he cares about people," McGillivray said.

A statement validated through Muniz's leadership role in a suicide prevention class that was held on Wednesday afternoon.

Muniz emphasizes the importance of listening to others concerns and struggles.

As far as his success, Muniz recalls one of his favorite quotes from the 2006 Rocky Balboa movie.