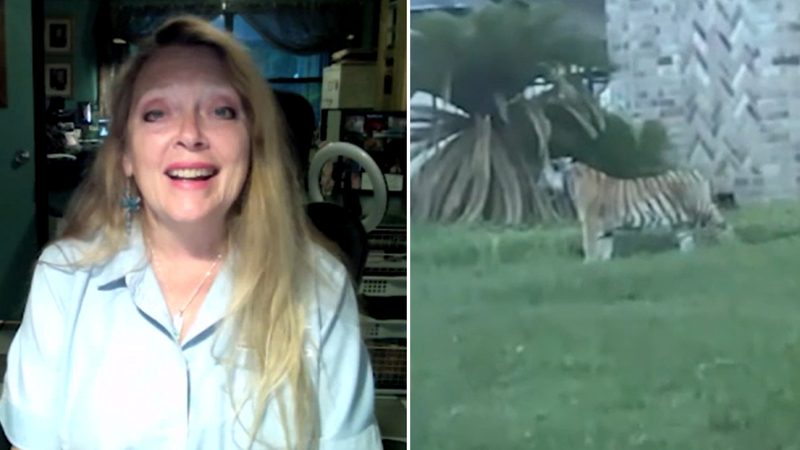 HOUSTON, Texas -- As questions grow around the whereabouts of a tiger that was last seen roaming a Houston front yard, Carole Baskin is weighing in on the big cat mystery that has gripped not only a city, but the nation.

And even though what has unfolded and turned into an ongoing saga since Sunday night sounds like something that would fit right in on a TV show, Baskin worries about the very real-life concerns of a dangerous wild animal's well-being and potential interaction with the public.

"This is a very dangerous animal, and if it is out running loose and hiding, it's going to be active more at night, and so people should keep their children and their pets inside. If people were to come across a big cat with no way of escaping, I mean if they can, they should get in a car or a building. But if they can't do that, they should do exactly what the off-duty deputy did, which is to keep contact with the cat, to not run, to not turn your eyes away, if at all possible to actually go toward the cat because that'll usually kind of freak them out," Baskin explained.

The Waller County, Texas, sheriff's deputy Baskin is referring to responded to the scene after getting an alert on the Nextdoor app. Video taken by a witness showed a man exiting a house on Ivy Wall Drive and pleading with the deputy not to shoot the tiger. The footage then showed the man grabbing the tiger by its collar and escorting it back into the home.

The suspect is now in custody, but the question remains - where is the tiger?

The man was later confirmed to be Victor Cuevas, who was arrested on a felony charge of evading police, after police say he fled with the animal in a vehicle.

"It's such a dangerous situation because this cat has no fear of humans, and yet, any of those actions, turning, running, tripping, a child just being small, will trigger that killing instinct," Baskin said.

She also commented on the tiger's possible living conditions. Cuevas' attorney Michael Elliott has argued that the tiger was in good health and taken care of.

But tigers' habitats usually consist of acres of land.

"The other thing that I notice really made me sad because when the cat went out in the grass, he kind of laid his whole body down, so that he could feel that grass underneath him and that tells me that this poor cat is probably being kept in some hard floor, concrete steel cage," she said.

We don't know for sure where 9-month-old India the tiger was kept.

Elliott told ABC News on Tuesday that Cuevas was about to voluntarily surrender and had agreed to help direct police to the tiger and its real owner but that he was betrayed at the last minute and arrested at his mother's home in Fort Bend County southeast of Houston.

You can watch Baskin's full interview in the video player above.

28-year-old Victor Cuevas, a suspect out on $125k bond from a 2017 murder, fled 1103 Ivy Wall Dr. with his pet tiger who had been wandering the neighborhood. This tells you just about everything you need to know about those who buy and sell tigers. https://t.co/iWAal0YMQK

SEE MORE: What's next for Victor Cuevas, and what does Carole Baskin think about all this?
EMBED More News Videos

With India still nowhere to be found, 'Tiger King' star Carole Baskin is weighing in on what you should do if you come upon the loose tiger.