'We want to have fun:' Carolina Hurricanes captain talks about team's post-game celebrations 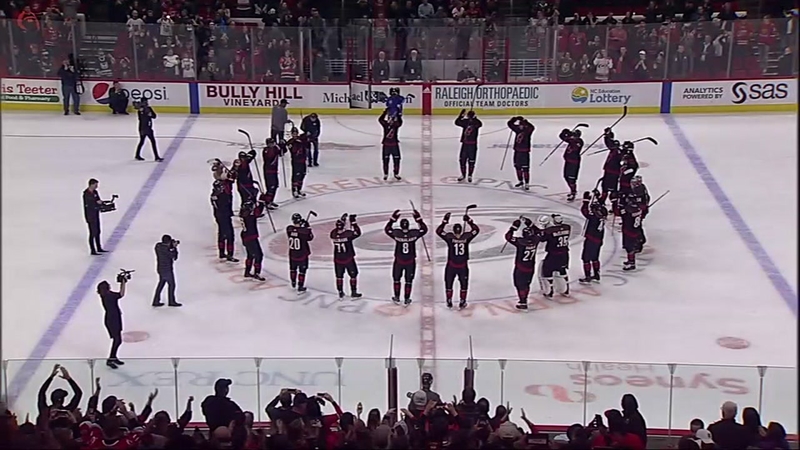 RALEIGH, N.C. (WTVD) -- They may be, in Don Cherry's words, a "bunch of jerks," but they're a bunch of entertaining jerks.

The "bunch of jerks" comments coming post-game by the Hockey Night in Canada host after the Carolina Hurricanes defeated the Edmonton Oilers 3-1 on Feb. 15. The team broke out, what's now a traditional, victory celebration in front of fans at PNC Arena.

But team captain Justin Williams doesn't see his team as jerks or their celebrations as offensive. Instead, he says the celebration is for the fans.

"We appreciate every fan that comes in this building," Williams said. "We want to have fun with them, and that's really what it's all about."

Williams was with the Canes when they took the Stanley Cup in 2006. He was named captain last season.

When asked where the celebration ideas manifest, he joked that the choreography for the victory celebrations--including the fan favorites like the "stick ride" and "duck duck goose"--are kept in a vault.

"They're in a vault. We fill it with all of the ideas that we have," Williams said. "And we come up with something not too stupid, but kind of fun."

He said his personal favorite is the "stick ride."