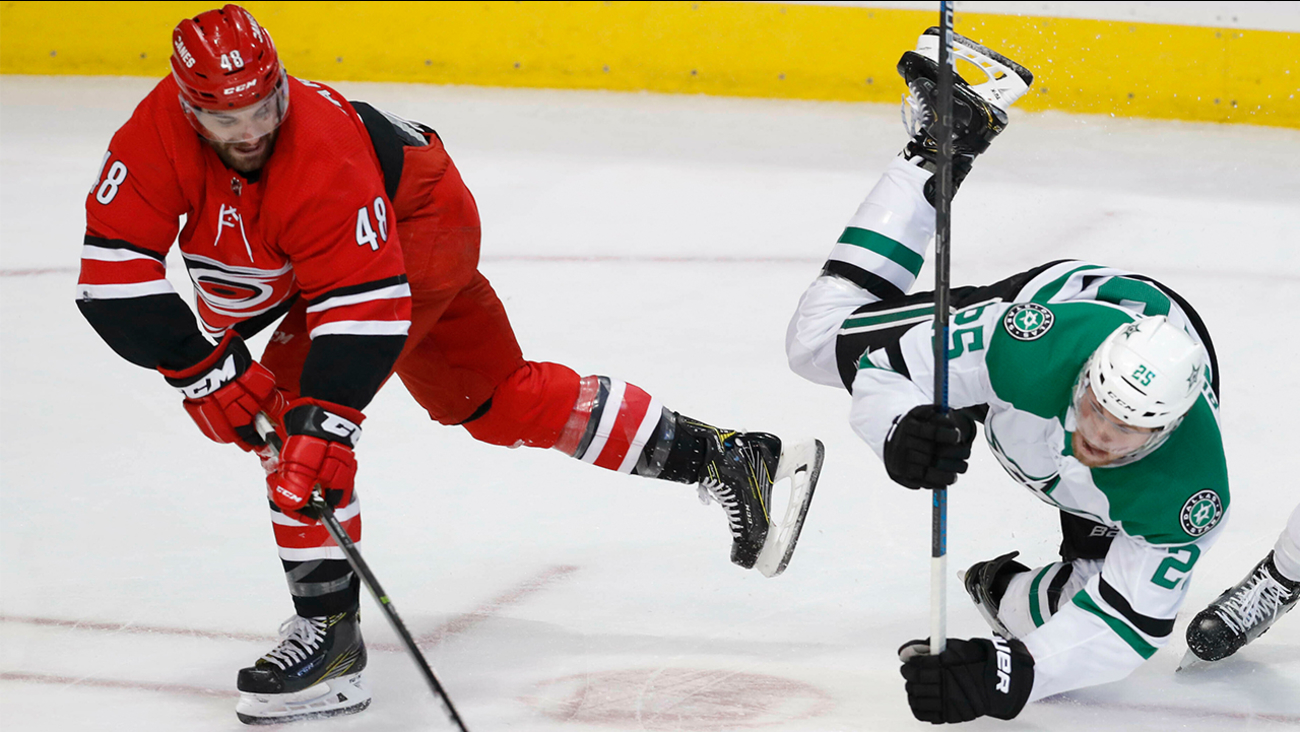 DALLAS -- Curtis McElhinney made 14 of his 24 saves in the third period for his 10th career shutout, and the Carolina Hurricanes beat the Dallas Stars 3-0 on Saturday.

Lucas Wallmark and Justin Faulk scored early in the first two periods to support McElhinney's second shutout of the season and the Hurricanes' fourth in 10 games. Jordan Martinook added an empty-netter with 2:31 to play as Carolina won for the fifth time in six games.

Ben Biship finished with 28 saves for the Stars, 1-5-1 in their last seven games but still clinging to a Western Conference wild card position with 21 games remaining.

Wallmark's goal came after Greg McKegg outmaneuvered Dallas' Taylor Fedun with the puck for a 2-on-1 break. McKegg passed across to Wallmark in the right faceoff circle, and he beat Bishop with a snap shot at 3:14 of the first.

Each team had a good scoring chance later in the period, but Carolina's Justin Williams hit the left goalpost on a 2-on-1 and the Stars' Jamie Benn had McElhinney out of position on a breakaway but sent a short backhand into the left post.

Carolina outshot Dallas 6-4 in the first, but the teams combined for 13 missed shots.

The Hurricanes extended their lead to 2-0 at 1:01 of the second, with 4 seconds remaining on a 5-on-3 advantage. Faulk sent a snap shot from the top of the right circle to the upper left corner of the net.

Dallas' Radek Faksa appeared to score with 49 seconds remaining in the middle period, but the goal was waved off because of goaltender interference by Blake Comeau.

NOTES: Hurricanes C Jordan Staal returned to the lineup after missing 27 games with a concussion. ... Bishop played for the first time since Feb. 4 because of an upper-body injury. ... Stars RW Alexander Radulov did not play because of an illness. Jason Spezza moved up to the first line with Tyler Seguin and Roope Hintz. RW Valeri Nichushkin, a healthy scratch in five of the previous eight games, took Spezza's place skating with Mattias Janmark and Jason Dickinson. ... D Ben Lovejoy, acquired in a trade with New Jersey, did not play for Dallas. ... The Hurricanes clinched the best February record in their 21 seasons in Carolina. They're 9-3 with one game remaining; the nine wins is also a team record for the shortest month.