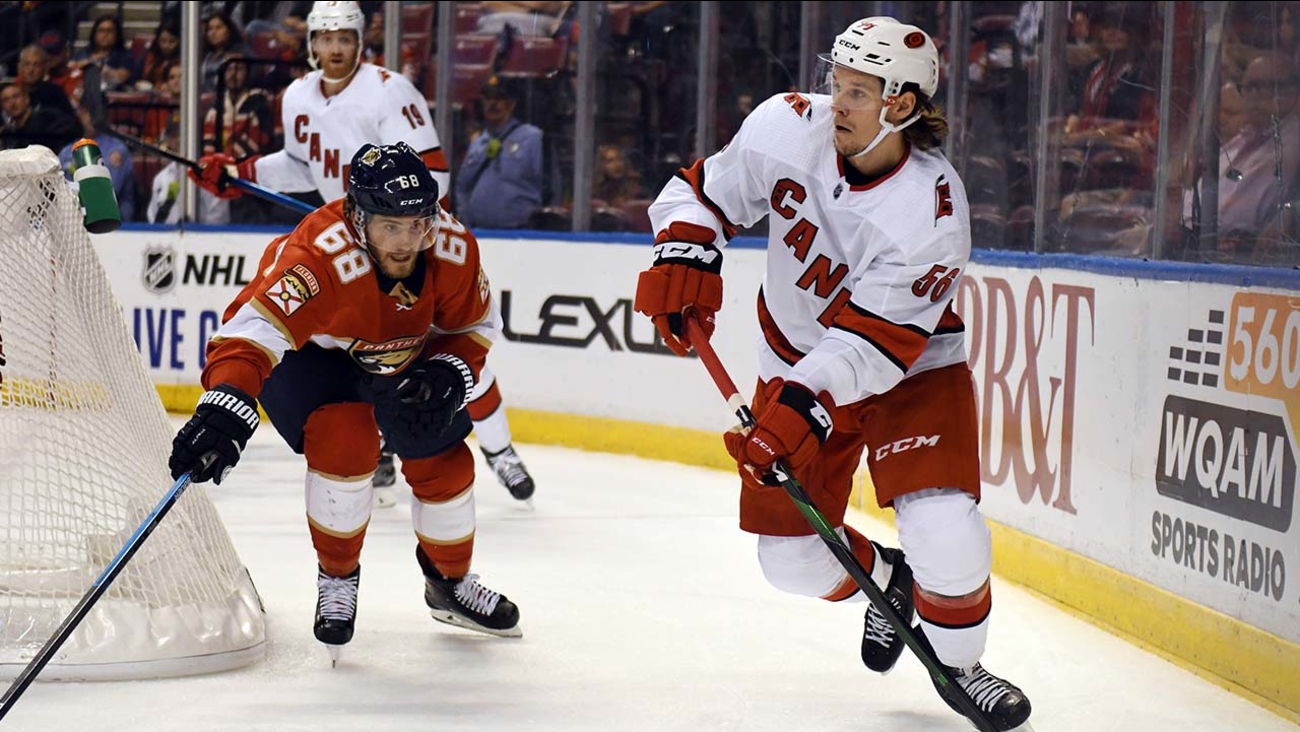 SUNRISE, Fla. -- Ryan Dzingel and the Carolina Hurricanes are off to a perfect start.

Dzingel scored two goals and the Hurricanes beat the Florida Panthers 6-3 on Tuesday night for their fourth straight victory to begin the season, equaling the best run in franchise history.

Teuvo Teravainen and Jordan Staal each had a goal and an assist for Carolina, which scored four times in the first period and opened a 5-0 lead after 21 minutes.

"The start was great. Really, that's where the game was won for us," coach Rod Brind'Amour said.

Andrei Svechnikov and Haydn Fleury each had two assists as the Hurricanes matched the 4-0-0 start by the Hartford Whalers in 1995-96, before the club moved to Carolina.

Sergei Bobrovsky allowed four goals on 14 shots before being replaced by Sam Montembeault to start the second period. Montembeault finished with 19 saves.

Dzingel's second goal extended Carolina's lead to 5-0 at 1:31 of the second.

"Some of those goals were self-inflicted," Panthers coach Joel Quenneville said. "When you're down one or two goals at home it hurts and it's got to bother you and you've got to get excited about it. I didn't like our response."

"You're just willing yourself to make saves and hang in there and try and stay square and hope they hit you," Reimer said. "Our guys had some huge blocks there at the end and it was fun to be a part of."

Florida got on the board when Weegar flipped in a loose puck from in front at 3:51.

"Coming in here and getting some momentum early was huge," Dzingel said. "Obviously, we'd like to finish a little bit better, but we'll work on that."

Aho scored into an empty net with 1:19 remaining.

The Hurricanes got four goals in a span of less than 12 minutes during the first period.

Staal gave them a 1-0 lead when he poked in the puck from in front after it deflected off a defenseman's skate at 6:48. After the Hurricanes killed off a 5-on-3, Teravainen made it 2-0 when he deflected in a point shot from Fleury at 11:04.

"That to me is the play of the game. We got some huge blocks ... and then we go down and score," Brind'Amour said. "That basically kills the other team."