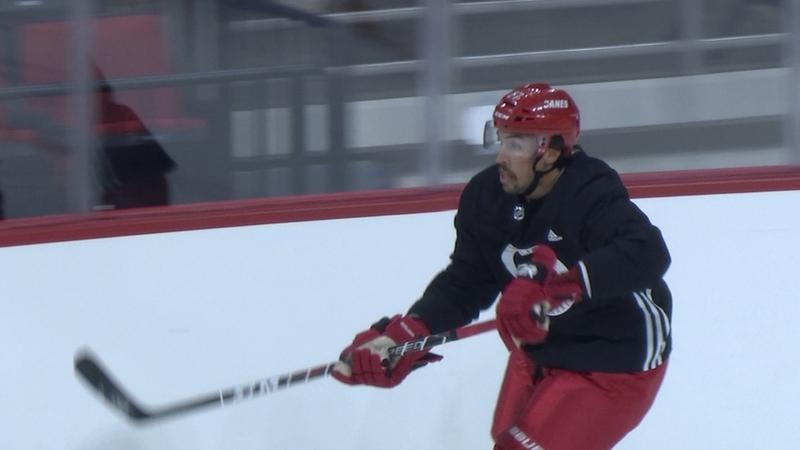 Those were the words of new Hurricanes defenseman Jake Gardiner following his first practice with the team today. Gardiner, a proven offensive defenseman, had plenty of options in free agency. That he chose the Hurricanes should tell you plenty. Gardiner was one of many new faces on the ice today at PNC Arena. Speedy forward Erik Haula is also making new friends and hoping to fit in to what he could already tell was a "tight group."

Gardiner and Haula are the two shiniest acquisitions of the offseason and both will figure heavily into the Canes plans this year. The rest of the roster's continued development will be key to the team's continued success too. Guys like Andrei Svechnikov spring immediately to mind, of course. Not to mention top scorer Sebastian Aho, who arrives with a fat new contract. There are few vacancies on the roster--that's what happens to good teams with now battle-tested players. Expect Martin Necas to make the big club this year though. The young Czech forward has dynamic skills and speed. After a year of seasoning at the AHL level, he is ready to spice up Rod Brind'amour's lineup.

As for Brind'amour, his expectations are clear. Give him everything you've got effort-wise. From there, the conversation about your role on the team begins. There's no reason to believe his players will stop believing in that message, especially off last season's magical run to the Eastern Conference Finals. Brind'amour said the coaches will pay very close attention to the goaltending situation. Petr Mrazek is the top gun, but behind him will be a dogfight for the backup spot.

Speaking of Mrazek, how nice was this? He returned from summer in the Czech Republic with treats for his teammates. Custom baseball hats designed with numbers and initials, the handiwork of a Czech artist.

Petr Mrazek had these hats made for everyone on the team. From an artist in the Czech Republic pic.twitter.com/XhxN0BgD9k