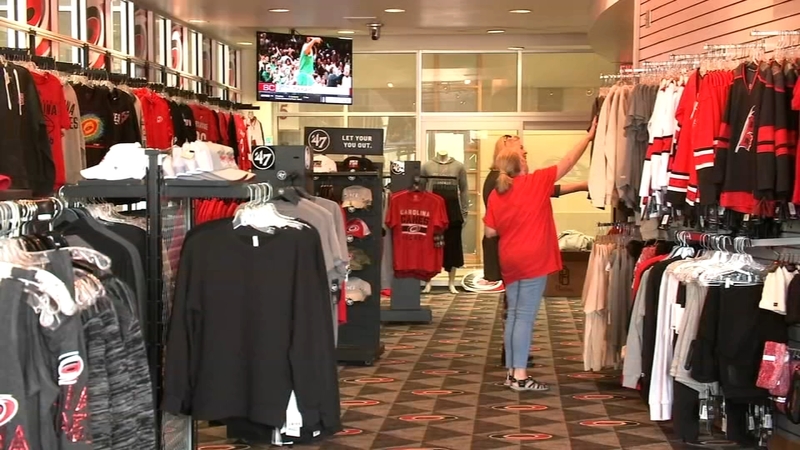 Canes' success on ice leads to boost in economic impact

RALEIGH, N.C. (WTVD) -- It's playoff time and Carolina Hurricanes hockey is at its finest. With the momentum heading into Game 2 for a run at the Stanley Cup, local businesses say they are seeing a benefit from the team's hot streak against the Boston Bruins.

The restaurant is across the street from PNC Arena and Carter-Finley Stadium.

"They're generating people across the street, parking across the street. The stadium's sold out. And whenever that happens, everyone tries to get some cold beer, some good BBQ, it's great for everybody. The atmosphere is awesome," Lumbrazo added. "I wish it was playoff hockey every day of the week."

Inside The Eye, the team's store inside PNC Arena, sales were steady throughout the day.

"Fortunately we support a lot of our out-of-market fans with our e-commerce website, CarolinaProShop.com, and we see orders from all over the country and around the world," said a representative with the Hurricanes. "And we've heated up a lot in the playoffs."

According to merchandise sales, the representative said the team sees roughly $200,000 in retail sales for each home game. Sales have been registered in every U.S. state and Canadian province.

At Players Retreat restaurant near NC State University, the restaurant has seen a healthy amount of traffic and sales thanks to playoff hockey.

"We do serve Bruins fans (too)," said Joe Anderson. "Always with a smile, maybe a little grudge. But they'll get the same good service as everybody else does."

The Greater Raleigh Convention and Visitors Bureau and Greater Raleigh Sports Alliance will not receive current playoff ticket sales information until after the season. Additionally, the local economic impact for hotel room nights sold for this current week will be available from the Bureau next week.