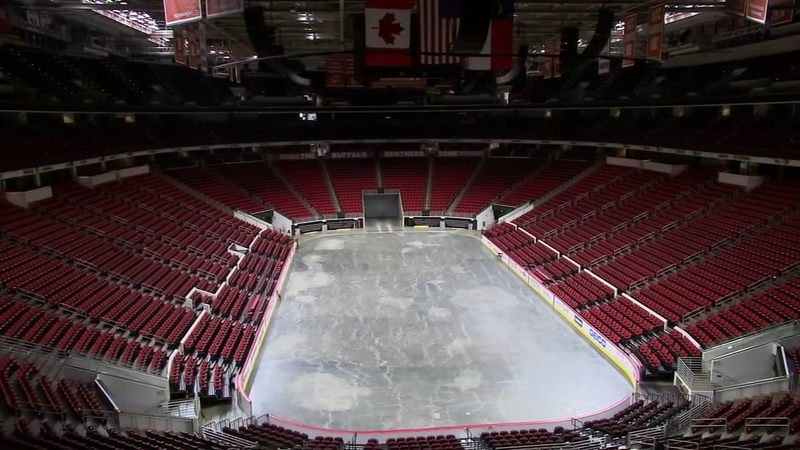 RALEIGH, N.C. (WTVD) -- PNC Arena is maybe the most pulsating place in the entire NHL come playoff time, so it is inarguably great news that it will remain the home of the Carolina Hurricanes through at least 2029. That's a sentiment shared by Centennial Authority Board Chairman Tom McCormick.

"The Authority believes that the Hurricanes are very important to the community. That's why we've worked really hard to try to keep them here," he said.

Hurricanes President and GM Don Waddell is also happy to have a year of haggling behind them and the framework of a deal in place.

"It's been a very professional, ongoing, and the end result is something I think people are very excited about," Waddell said.

A major tenet of the deal -- time to evaluate whether to refurbish PNC itself and usher it into the modern age or build a new Raleigh arena altogether. Waddell said there is no hurry on those larger decisions but expected some motion one way or the other within the next 24 months.

"It's a great building ... it's been kept up to date, as much as it can but we just need some of the new amenities that new facilities offer so that's something that we've been talking about for quite a bit of time."

Aside from the actual structure, Canes owner Tom Dundon is eager to see business and entertainment development around the arena, something that's been talked about since the Book of Genesis but has never actually happened.

"It gives us an avenue to pursue that and also potentially look at other sites to determine what's the best place for this building to be for the next 25 years" Waddell said.

The largest factor here? Dundon is keen on Raleigh. Whatever uncertainties he might have had about the market when he bought the team have been assuaged by the thunderous playoff crowds of last year. It was proof that if you spend money on the team this town will spend money to support it.

I reached out to Dundon directly and he confirmed as much via text: "Market has confirmed that they will support the Hurricanes for sure as long as we do our part."

McCormick has enjoyed Raleigh's sales job on that front.

Waddell chimed in on that note.