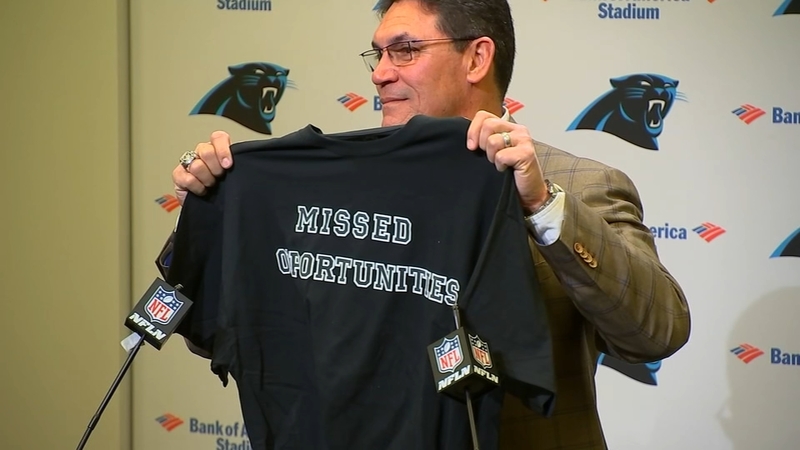 Ron Rivera speaks a day after being fired as Panthers coach

Rivera was stern in his address saying he's proud of what he did here at Carolina leaving as the Panthers winningest head coach.

Rivera was fired days after a 29-21 loss to the Washington Redskins at home, a low point in an up-and-down season. The defeat left the Panthers at 5-7 and a longshot to make the playoffs.

Ron Rivera was reflective in saying goodbye to the Carolina Panthers organization on Wednesday.

"I was surprised," Rivera said of his reaction to being fired. "If anything I thought it would happen at the end of the season."

Rivera said he addressed the team Tuesday morning before he spoke to the media.

“I got four weeks off... my intent is to coach again.” pic.twitter.com/sNai2BoXTY

"Anybody can coach. To help somebody in life, I think that's really cool. To hear from players you've given advice, that's worth the effort."

He said his one regret is not winning the Super Bowl.

The Panthers reached the Super Bowl during the 2015 season, falling to the Denver Broncos. It was the franchise's second Super Bowl appearance, and Rivera said losing that game was his biggest regret.

Rivera says his job is about much more than coaching on the football field. pic.twitter.com/aDGqOER4Rq

"We had an opportunity and these are circumstances we can control," Rivera said. "I get it, I've been in this league long enough. I know how things are supposed to be and when things aren't happening you get taken to task."

The successes were marked by the team winning three consecutive NFC South championships from 2013 to 2015. Since then, disappointment has largely been the theme, with a brief playoff appearance in 2017 being the high mark. Star quarterback Cam Newton has been plagued by injury, leaving his future with the team uncertain.

Rivera thanked the organization and the city of Charlotte for embracing him along with many others within the organization. Rivera was hired by former owner Jerry Richardson, the predecessor of current owner David Tepper.

"We came in and did the best we could," Rivera said. "When we leave, hopefully, we left it a better place."

Not a bad word was spoken about Ron Rivera in the locker room today...instead the players praised him for his genuineness and the culture he created. #KeepPounding #Panthers pic.twitter.com/dUazIK3IxS

Rivera said he loved coaching and that it was his intent to coach again in the league.

"My intention is to coach again," he said. "I love coaching."

For Rivera it's been more than just winning and losing. He's been the spokesperson during difficult times both on and off the field. He's created relationships with current and former players many who have taken to social media to thank him.

On the day I was traded to the @Panthers in 2011, every player who played for Ron in Chicago said the same thing to me on my way out. “You are going to play for a great coach, but a better man”.

This is really different for me but, I want to say thank you for helping be apart of molding me into the player&individual I am today. @RiverboatRonHC no matter what may take place your ⭐️has Never shinned brighter.. I look forward to what’s in-store for you&your Familia next!

"They thanked me for the things off the field," Rivera said. "Not the things on the field. Anybody can coach you up but to help somebody in life I think that's cool. When I've had the guys that have said hey I really appreciate you thank you for the advice on this...that's been worth everything."

Rivera finished his press conference by holding up two t-shirts: One reading "missed opportunities" and the other spelling out "Thank You."