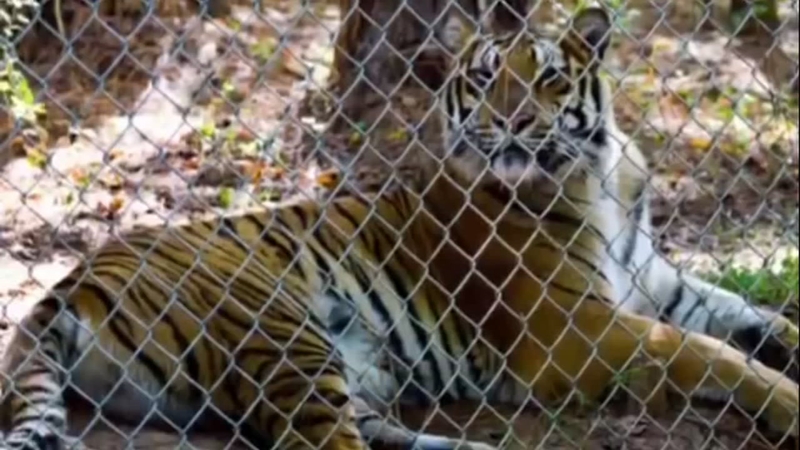 A visit to the Carolina Tiger Rescue

CHATHAM COUNTY, North Carolina (WTVD) -- If you didn't already know, Pittsboro is home to a refuge for big cats who have spent their lives as entertainment acts or as pets.

Carolina Tiger Rescue is just off Hanks Chapel Road. Fifty-five animals call this place home. There are about 10 species including tigers, lions, and leopards.

Each has its own story of how it got there.

Thirteen years ago, a tiger, now named Raja, was found off the side of a road just outside of Charlotte. An off-duty police officer found him and another cub and called for help.

"It is legal in North Carolina to own exotic animals, it is illegal to own indigenous animals," explained Lauren Humphries with the rescue. "So whereas you cannot own a raccoon legally, you can own a tiger in your backyard. And not only do you not have to tell anybody you have it, you don't have to register it or get it rabies tags and so we have no idea how many animals are living privately owned in North Carolina; there's no registry."

She said they've been working toward tougher legislation, but so far have not been able to make it happen.

Other animals came to them as part of entertainment groups. A lion named Sebastian was a prop for a haunted house in Texas. Another lion named Sheba came from Mexico. When she was a cub, she was part of a pay-to-play operation, where people pay money to play with baby lions. Not only are these animals young, but often times they're declawed and their canine teeth are either filed down or pulled out.

"They're being pulled from mom earlier than they should be and they're being handled, stressed and can pick up diseases more easily because their immune system isn't fully developed," said Humphries. "These are money-making facilities and so they want to make money off these animals so if they can't sell them as pets, again they're getting bigger, more rambunctious, they're not cute and cuddly anymore. They can sell them off to roadside zoos which may not have a lot of regulations. They're often sold to the canned hunt industry where you pay big bucks to shoot a caged animal."

Just last year, the rescue took in 10 animals from a large rescue operation out of Colorado.

In the wild, some species of tigers are already extinct and the rescue is working to help educate people on how to help. One way is to limit palm oil use.

"Palm oil is an issue because it uses slash-and-burn agriculture to clear rainforest areas that are habitats to many, many species," said Humphries. "The rate, according to the World Wildlife Fund is clearing up to 300 football fields an hour of rainforest to make room for palm oil plantations and so it's a vegetable oil used in about 50 percent of your products, from your foods to your deodorants to your cleaning materials."

You can even start helping this Halloween. Palm oil is used in a lot of candy and that oil comes from areas that tigers call home.