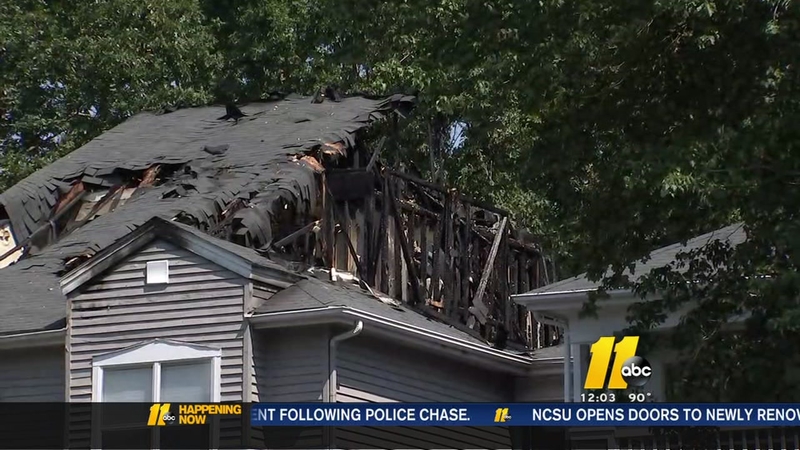 It happened just before midnight at the Hyde Park Apartments off of Northeast Maynard Road.

The flames were seen shooting through the roof and throughout all three floors of the apartment building when firefighters arrived.

"We noticed smoke coming out and we just ran," resident Maryan Omar said. "Grabbed whatever I could and just ran, and I didn't even look back. The good thing is everybody was helping each other out, calling us ... even knocking our doors saying, 'Get out!'"

"All of a sudden I just hear banging around in the apartment," resident Nick Lucasey said. "I just assumed it was some kids banging around the door. I just looked out and I see flashing lights everywhere."

No injuries were reported, but a dog and two cats died in the fire.

Officials said about 12 units were damaged in the blaze, where around 19 people lived. However, they said the whole building had to be evacuated, so a total of 35 people were displaced.

Cary FD cleaning off photos that were salvaged by the fire. #ABC11 pic.twitter.com/YcaFUwhd8L

"Our biggest concern is making sure everybody gets out of the building," Cary FD Assistant Fire Chief Loren Cone said. "We have 12 units affected by the fire, one of those units had to be searched to make sure we could account for all 20 of those individuals."

"With these old legacy apartments, the way they are designed, it is a lot of work to make sure they are evacuated with the multiple levels and roof structures," Cone added. "The fires are very hard to contain."

Officials said there were no sprinklers at the apartment complex because it was an older building.

The cause of the fire is still under investigation. Residents told ABC11 a resident was smoking on her balcony with a candle lit. She put out the cigarette and went inside. She came back to find flames everywhere.