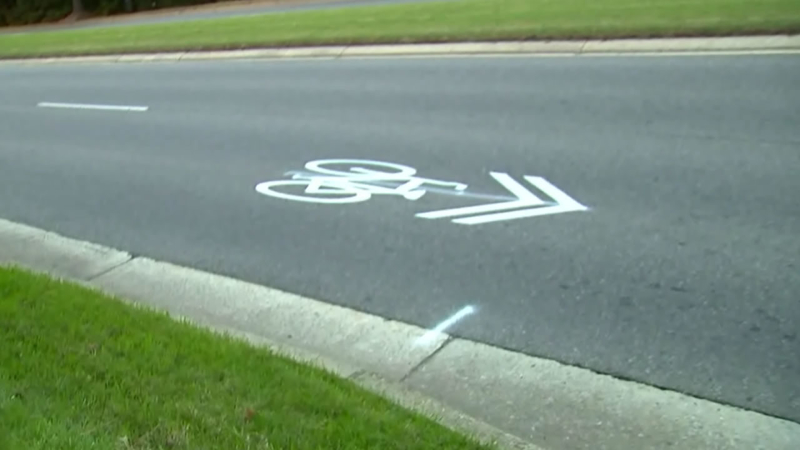 CARY, NC (WTVD) -- David Lamar says he has concerns for bicyclists who want to ride along Weston Parkway in Cary after the town painted shared lane "sharrows" signs on the pavement. Lamar says he feels the signs offer a false sense of security.

"Cars are flying around that curve," he said. "Normally, people go 55 or 60 miles an hour when they're in a hurry to get somewhere. So if you're a bicyclist and you're trying to stay to the right, this road has some problems."

The new markings were installed Friday and Cary officials say it's part of the town's 30-year bicycle plan.

The right most lane in both directions of Weston Parkway is now a shared lane for cyclists. The town says there isn't enough space to put in wide, designated bike lanes.

"We're limited in the amount of right-of-way that we had," said Cary Facility Planning Manager Juliet Andes. "This is just one tool in our toolbox."

"I don't want to have any more bicycle injuries or fatalities," said Lamar.

But Cary cyclist Paul Russo said he's happy to see a change and plans to use the lanes cautiously.

"You have to be very diligent when you're riding bikes on the street and you have to pay attention," said Russo. "I might be a little nervous there even though there is a clearly marked thing."

Lamar, though, won't ride along Weston.

"If there's ever an interaction between a bicycle and a car, we know who wins," he said.

A group of cyclists were injured last week on High House Road while out riding. One of the victims is still in the hospital.

The Cary Police Department reports there have been 20 wrecks involving bicyclists in the last 12-month period. Seven of those crashes resulted in injuries. The have been no fatalities in the town in 2016.

This month, a Cary man riding in Chatham County near Jordan Lake was hit and killed by a truck on Hwy 751 that hit him from behind.