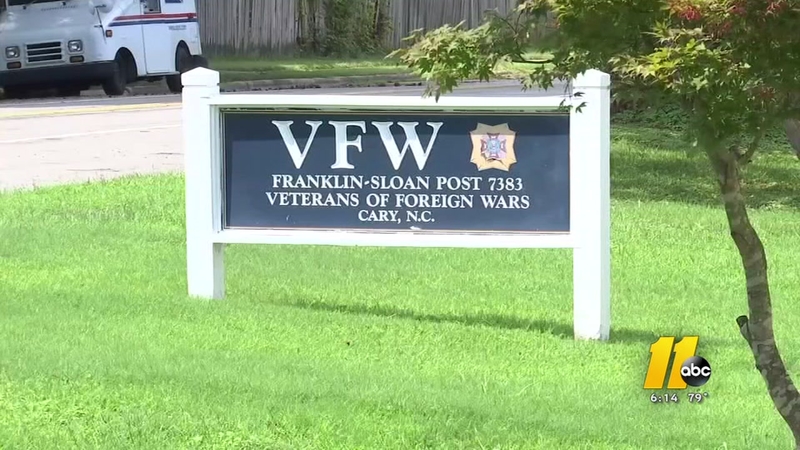 CARY, N.C. (WTVD) -- Cary Police have made an arrest in connection to a break-in at the Cary VFW Post in August, as they continue to search for the second person involved.

Stephanie Coleman, 45, made her first appearance in court Wednesday morning. She has been charged with breaking and or entering and larceny after breaking and entering.

Security cameras positioned throughout the building caught the theft as it unfolded. It began with a person breaking a glass door to gain entry into the building.

"Who does something like that? Especially to a veterans organization. Everything we do here, everything comes in, goes right back to the community and someone else who needs it," said David Wagoner, the Commander at Cary VFW Post 7383.

Wagoner is in the Army Reserves and has been with the Army for 10 years. During his time, he's served two tours to Afghanistan - during Operation Enduring Freedom and Operation Freedom Sentinel.

Though he said he was upset by the stolen funds, the repairs and upgraded security have been a larger nuisance.

"We're a 100 percent volunteer organization. So you're taking time out of our days to come up here, be here, get the door replaced. So it stings," explained Wagoner.

The thieves made out with more than $1,100, which is actually less than the amount of money the Post has had to spend to make those fixes. Wagoner estimated it's cost about $1,400 to do so, and are looking for donations to assist them with further work.

Despite their situation, the Post has tried to focus on donations for others, specifically Hurricane Florence victims.

"That's what we are, that's who we are. We're all veterans, and adapting is what we're best at. No matter what the situation is," Wagoner said.

Members have driven down donations the past three weekends, and have served as a donation drop-off site.

"We're not going to let something like this define us. And we haven't," Wagoner said of the break-in.

Citing departmental policy, Cary Police were unable to comment on the investigation, only stating it remains open and they have not located the missing funds at this time.