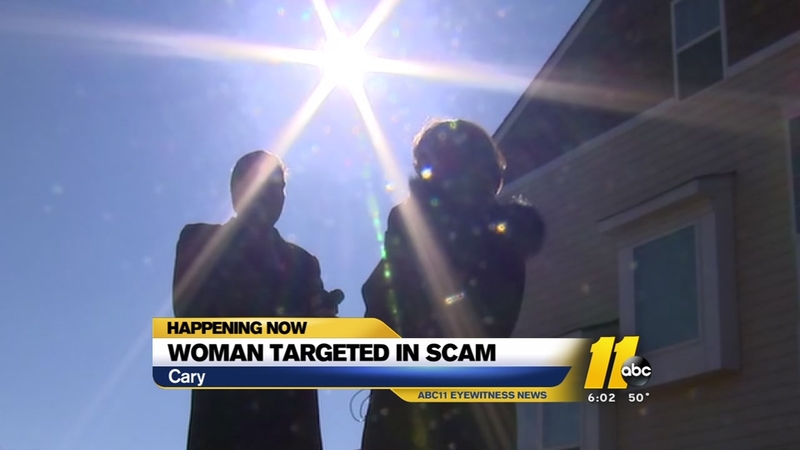 CARY (WTVD) -- It was Saturday morning when a Cary woman got a phone call from a man claiming her husband had been in a car wreck that had injured his 9-year old son.

He said his brothers who were with the boy at the time of the crash were angry.

"He says, 'I'm trying to keep your husband safe but it's very difficult right now. My brothers are going to kill him. And the only way that I can stop that is with your cooperation.'"

The woman, who didn't want to be identified, said the caller told her not to hang up and not to try to contact her husband adding, "I've got your husband's phone. Don't you dare call him right now. My brothers will kill him.' And I'm scared to death. I'm driving down the road from Cary to Durham."

She was driving to Durham because her husband works at a car dealership there.

It was the only way she could think of to find out if the call was a scam.

"He says to me, 'Well get in your car right now and go find some money to help with my son's bills.'"

When she kept stalling, he got agitated with her.

But when she arrived at the dealership, she got a jolt.

"I look in the window to see if my husband is sitting at his desk and he's not there. My heart stopped."

Finally, she found him and described what happened next.

"As soon as I see my husband, I hang up on the guy. The guy calls back; my husband answers the phone and had a few choice words to say to him."

Since she was in Durham she reported the crime to police there.

She also called Cary police when she got home and said she was told there have been similar cases recently, which is why she's speaking out.

She said she had heard about a number of other scams but not this one.

She said the fact that the caller knew so much about her and her husband made him more believable, especially when he correctly pronounced her hard-to-pronounce last name.

"It's easy for people to say, 'I wouldn't fall for that' or 'I wouldn't do that' But these scams ... if there's an ounce of truth to anything that they say, how did they know my husband was at work that day? Not everybody works on Saturdays. I thought it might be possible. They called me by the right name. I didn't know if that was right or not or the truth, so I'm believing the guy."
Report a correction or typo
Related topics:
caryhostagescamdurham county news
Copyright © 2021 WTVD-TV. All Rights Reserved.
TOP STORIES
Husband of missing Sampson County woman caught after I-40 chase
LATEST: Biden to speak at Green Road Community Center in Raleigh
First, lumber shortages. Now, lumber thefts
Short-staffed Wake EMS calls upon Johnston Co. agencies for help
New warning signs in place near Duke Energy dam after tubing tragedy
Britney Spears asks judge to free her from conservatorship
COVID-19 vaccine hesitancy persists among NC youth
Show More
2 young girls mysteriously found dead in Florida canal, IDs unknown
McAfee antivirus software creator dead in Spanish prison
Pedestrian bridge collapses onto DC highway, injuring several
NC officials, activists react to Biden's plan to address gun violence
Black WWII veteran who was denied Purple Heart finally gets it at 99
More TOP STORIES News