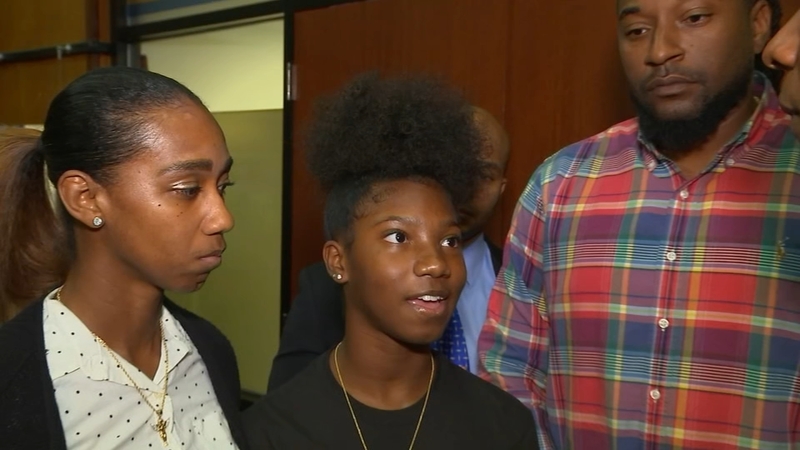 WAKE COUNTY, N.C. (WTVD) -- The Wake County School Board praised the courage of a 14-year-old who posed as a white student to gain access to her classmates' group chat and exposed the racist messages.

Even before Cenayia Pope Edwards walked into Tuesday night's meeting -- most board members already knew who she was.

They had heard about how first-year East Wake High student posed as a white student to gain access to her classmates' group chat -and exposed the racist hate-filled messages inside.

Cenayia's efforts were the first order of business at the meeting.

"First, I want to highlight the courage of a single African-American student who was willing to confront the racist comments of others," said WCPSS Superintendent Cathy Moore.

Tonight’s Wake County School Board mtg began with praise and apologies to the 14-year-old student who infiltrated and exposed her classmates’ racist group chat.
Cenayia and her parents sat in the front row — happy to hear the words but hoping for more action. #abc11 pic.twitter.com/FyYMIT5Hv2

Cenayia celebrated by Moore and the board for calling out her classmates who wrote things like 'Pullin triggers and killin n-----' and 'Kill n----- babies' and who responded to Cenayia with a meme of a cartoon penguin with a gun alongside the message, 'Shutup n-----.'

The small army of people who came to the board meeting in support of Cenayia want more than words.

"And if my 16-year old or 13-year old had to experience what this young lady had to experience in this chat room, I would be horrified and outraged," said Letha Muhammad, a WCPSS parent and Director of the Education Justice Alliance.

The family's pastor, William Newkirk, also addressed the board saying, "There's an elephant in the room of our public schools and the elephant cannot be ignored."

The community advocate who helped the family bring attention to the racist chat group spoke as well.

"The first step to rectifying this situation is accountability," said Kerwin Pittman, Executive Director of R.R.E.P.S (Recidivism Reduction Education Program Services). "Someone has to be held accountable so this doesn't happen again."

WCPSS maintained most of the students in the group chat were from Johnston County Schools. JCPS told ABC11 that it has addressed the situation, but won't detail how students were punished.

And while Wake said privacy rules bar the district from discussing punishments as well -- some board members suggested some district policies on hate speech need to be tougher.

"I trust our teachers, our principals and staff to protect our children. I've met them and I trust them. But we must all do our part to say this is racism and it isn't ok," said Heather Scott, whose board seat includes East Wake High School.

The superintendent and board chair spoke of doubling down on the district's efforts for restorative practices - to change behavior rather than a simple punishment.

"Do I have faith in them? I don't," said Cenayia's mother Cecelia Edwards who also serves as an Army recruiter at her daughter's school. "Thanks for the apology and we appreciate it because it hasn't been done publicly. But do I believe in it? I'll believe it when I see it."

Cenayia said she appreciated the apology, but is still waiting for justice. "I felt really good (to have been apologized to)," she said. "And I now I look forward to what is going to be done. I want the schools to be held accountable for what they didn't do."

Cenayia and her mom and dad left WCPSS Headquarters having done something that is not always easy -- getting the district's attention. But what they want is some measurable accountability for the school's principal and the East Wake students involved.
Report a correction or typo
Related topics:
educationwake countyeducationracismwake county newswake county schoolsjohnston county news
Copyright © 2022 WTVD-TV. All Rights Reserved.
EDUCATION
Women's Audio Mission changes the face of sound
Fayetteville State University receives $5.7M gift
Why a teacher has kept an empty chair in his classroom for 52 years
Black to the Lab looks to pave the way for girls of color in STEM
TOP STORIES
SCOTUS sides with football coach who wanted to pray on the field
Durham police involved in shootout after vehicles enter crime scene
Target, Walmart weigh paying you not to bring back unwanted items
Abortion rights supporters lead protest in Cary
At least 730 flights canceled across US on Sunday
PGA Tour Pro Varner III donates to Durham-based SwingPals
Roe ruling shows complex relationship between court, public
Show More
Man shot, killed in Fayetteville, police searching for suspect
A person was killed in alligator attack near Myrtle Beach in SC
Russia sets Friday as start date for Brittney Griner's trial
Durham museum hosts its first family LGBTQ+ activity
There are many ways to eat healthy amid high food prices, experts say
More TOP STORIES News