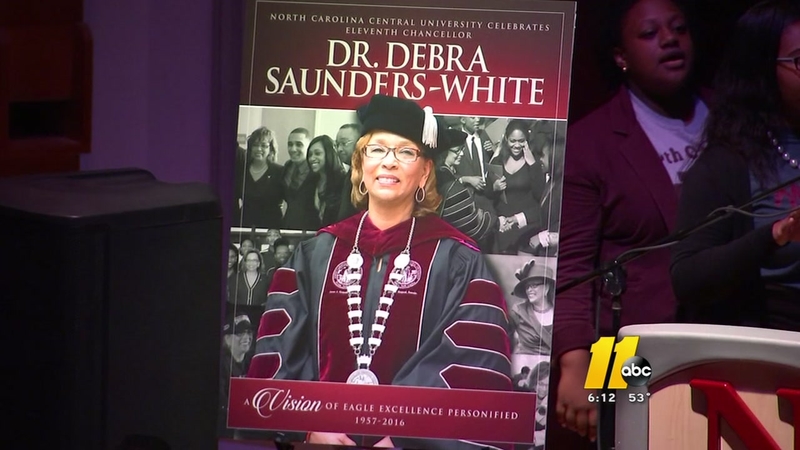 NCCU's first permanent female Chancellor was best known for her most notable phrase, "Eagle Excellence." The message resonated with her students-especially those following her path.

Farmer, now a teacher in Durham, says he first met Saunders-White as an undergrad at UNC Wilmington, and then later at NCCU when she awarded him a post baccalaureate diploma.

Farmer says she inspired him to pursue education.

"When I think of great leaders, I think of those who are walking with you and doing the work with you-that's exactly what she exemplified," Farmer says.

Saunders-White is credited for boosting enrollment, and recently raising the University's national status with the distinction as a top HBCU.

She lost her long-fought battle with cancer but won the heart of every life she touched.

"I was heartbroken," says Michael Hopkins, an NCCU student and one of the organizers of Monday's candlelight vigil. "I understood the diagnosis but at the same time I just knew that our chancellor was going to fight it. She is such a strong woman. She was always charismatic always willing to talk to someone and offer a helping hand-to know that she is not here it hurts."

A celebration of life ceremony for Saunders-White is scheduled for Friday at 2 p.m. in NCCU's McDougald-McLendon Arena. A funeral is set for Saturday at 11 a.m. at St. Joseph's Catholic Church in Hampton, Virginia.

Dr. Johnson O. Akinleye, provost for academic affairs, is now the acting Chancellor until a successor is announced.