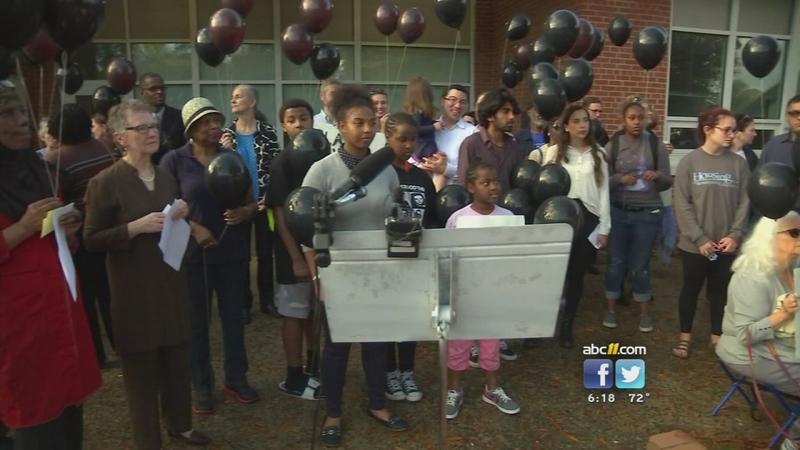 CHAPEL HILL-CARRBORO, NC (WTVD) -- Some say education is not equal when it comes to race in Chapel Hill Carrboro City Schools.

Wednesday evening, the Campaign for Racial Equity in Our Schools hosted a press conference at the administrative offices of CHCCS. Included in that group are the local chapter of the NAACP and Organizing Against Racism in North Carolina. They believe that there are "extreme racial disparities" and accuse the school district of failing to educate the majority of African American and Latino students.

Over the summer, the group hosted what it calls listening sessions with 100 students and parents and even some who work for the school district. From those sessions, they cite stories of African American parents who are disappointed to find what they describe as an environment of racial stereotyping and low expectations from their students.

They say one student, who is Latina, complained that despite being a strong student she was advised by a guidance counselor not to enroll in advanced placement courses because they might be too hard.

Some of the numbers pulled from the report show:

While the group's news conference was held on CHCCS property, no one from the district participated. District leaders say they are listening and are looking through the report submitted by the group.

Sheldon Lanier, the district's Director of Equity Leadership said, "We are listening. We continue to speak with individuals and groups representing our entire community."

In an email, Lanier goes on to say, "We have heard the concerns of the Campaign for Racial Equity and we share a common goal. We want the same results.

He went to say that CHCCS is one of only three school districts in North Carolina to fund a full-time Director of Equity and that he's leading an equity task force made up of a diverse cross-section of school district employees and community members.

Lanier also points out that while they admit there is more work to be done in progress there have been some improvements. He says in 2013 only 19.4% of their 8th grade African American students, male and female combined, passed end of grade reading. In 2015 that number increased to 43.9%.

District representatives say they would like to discuss the study submitted from the Campaign of Racial Equity in Our Schools. The timeline for that could be up in the air as new school board members could be elected next month and then sworn in in December.