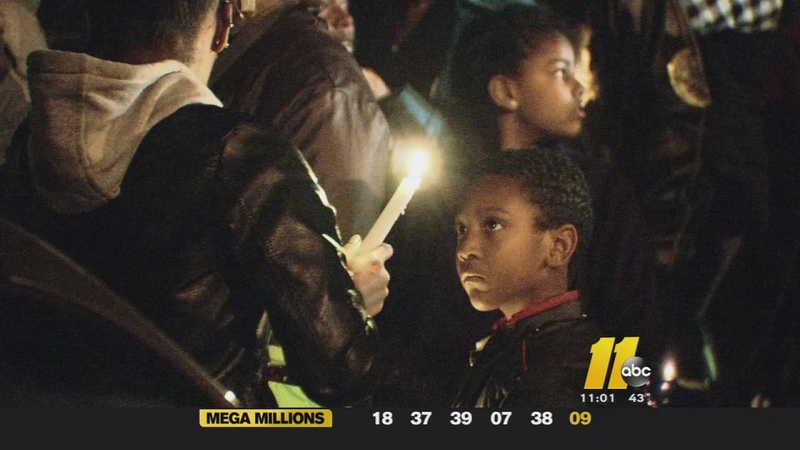 Dozens of families crowded the street in front of the Trinity Court apartment complex where the little girl was gunned down on Christmas day as she played with her toys.

Many of them expressed anger about how she died and called for change.

Vivian Rorie is still dealing with the pain of losing her 14th grandchild.

"I just want to see what's right happen," Rorie said. "She was just an innocent child."

The NAACP hosted the service to show community support for the family of Maleah, who was mortally wounded in a drive-by shooting.

A close friend of the family, grieving. The service was part memorial, part healing session, part call to action. pic.twitter.com/Ic3gHYTjjO

At the rally, NAACP head the Rev. William Barber and others talked about curbing community violence by standing together.

"We must hear the pain of those who are hurting." Barber said. "We must have a revival in our community; a revival of our self-worth. We must heal our soul and bring the community together."

The Rev. Michelle Laws is executive director of the state chapter of the NAACP and a Chapel Hill native who grew up in the same public housing complex as Maleah's grandmother. She says the "community's collective heart is broken over the tragic senseless death."

At the service, gun violence became a central theme. Chapel Hill Mayor Pam Hemminger said, "We need to act and we need to pull together. We also, in order to heal, need to act together as a community and find ways to make these things not happen."

Hemminger continued, taking a shot at state legislation that strips aways local control over gun ordinances. "We need a stronger ability to have that local control and stop senseless violence," she said.

Maleah's mother, getting comforted after the NAACP's rally/service for the 1 yr old, killed Christmas Day. pic.twitter.com/3GRnCGjxCP

The message resonated with many in the crowd.

Three men have been charged with murder in the death of Maleah, who died Monday.

Shaquille Oneill Davis, 22, Ramone Jamarr Alston, 22, and Pierre Je Bron Moore, 23 are all being held in the Orange County jail.

Davis, who's charged with attempted murder, is due back in court Jan. 4.

A funeral is planned for Saturday at 1 p.m. at Chapel Hill Bible Church, 260 Erwin Rd. in Chapel Hill.

The family will receive friends at noon.

The community rallied around the mother and family of the little girl killed by a stray bullet in a Chapel Hill drive-by shooting on Christmas Day.