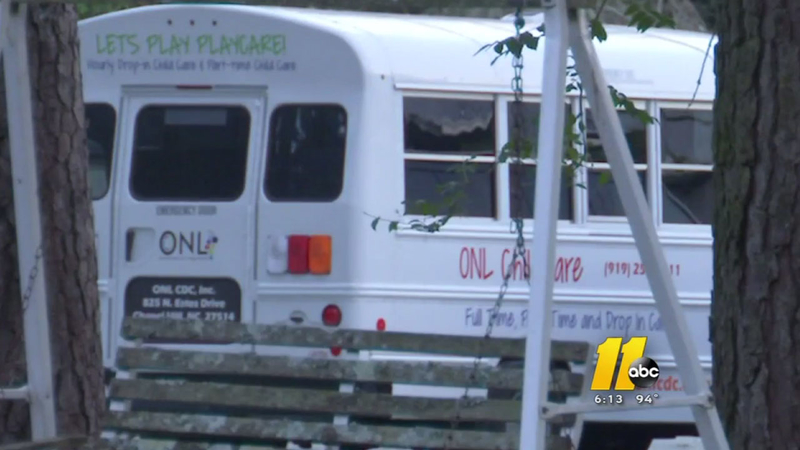 CHAPEL HILL, N.C. (WTVD) -- The state has taken emergency action and shut down Operation New Life Daycare days after a 2-year-old was left on a hot school bus. A sign now greets parents outside of the Chapel Hill center notifying them of the closure.

Karah Evans was found on the bus Tuesday when temperatures spiked to 100 degrees.

DHHS said in its suspension notice the "conditions at the facility represent immediate danger to the health, safety, and welfare of children receiving care."

DHHS cited a number of violations. Its biggest contention was what happened after the child was found. The toddler was sweating profusely and couldn't hold anything down in her stomach once she finally given food and water.

DHHS said in spite of those conditions, "facility staff failed to properly implement the emergency medical care plan as they did not contact emergency personnel, did not contact the parent for an extended time after finding the child and observing the child vomit, and did not advise the mother to the fullest extent of the incident.

The toddler's mom, Kimberly Cates, was the one who reported the incident to authorities

"I'm very happy with the outcome," said Cates on the closure. "(I'm) very pleased because they shouldn't be allowed to stay open. They shouldn't have that right. If they're not really going to put the best interest of the children their priority, you can't run a business like that."

Cates said administrators bribed her not to call police.

"I think they were thinking I was just going to let it slide. Keep my mouth shut, maybe take a job because they think I'm in this desperate state, but I'm not. And I'm not going to be quiet about it," she said.

Administrators told ABC11 the person responsible for the child's welfare was fired and released the following statement:

"Yesterday afternoon, June 16th, 2015, there was an incident with one of the children in our care. When the administration and staff at Operation New Life became aware of the situation, we took immediate action to tend to the child in need as well as alerting the parents of the child. Be assured the safety and care of the children entrusted to us is our highest priority. The individual responsible for the incident failed to perform her duties and avoided several safety checks built into company policies to ensure the safety of the children. The administration has addressed the breakdown in policy by implementing a new reforms policy that will require more than one person to be responsible for a specific duty and strengthen the safeguards involved to ensure that nothing like this ever happened again. The individual was terminated immediately upon learning what had happened. Also the ownership, staff and administration of Operation New Life is coopering fully with State and local authorities as they investigate this matter."

Bus monitor Rosa Brigman admitted that she and a bus driver never did a walk-through once they arrived at the center and, when they discovered the child later, the 2-year-old was motionless.
"When they pulled her out she was sweating to death," said Brigman. "Her eyes were open, but she wasn't moving."

Evans remarkably survived. On Friday, she had a follow-up exam with her doctor. She's fine physically, but mom knows not emotionally.

"I definitely know there is some trauma," she said. "My child is scared. You know you want to protect them at all costs."

Cates is looking to police now for further justice. A criminal investigation is underway and charges could be filed.

"She could have died and it's serious. Everybody needs to talk responsibly," said Cates.

ABC11 reached out to the attorney representing the daycare a number of times. He has not responded back for comment.

The daycare could appeal the State's decision to close the facility.