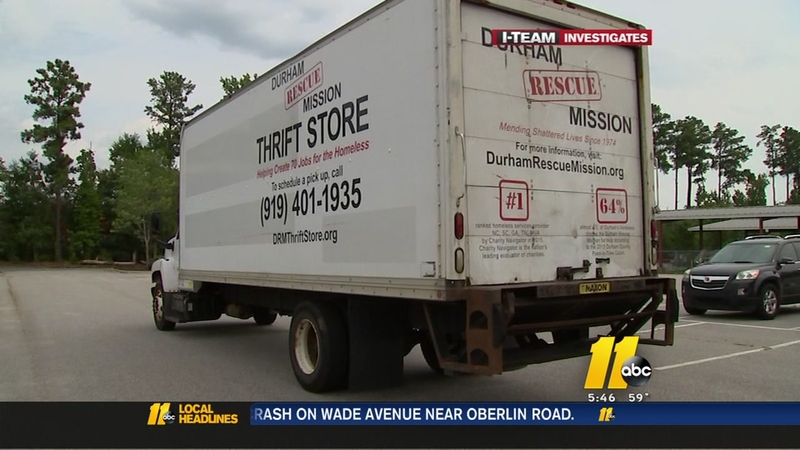 Donations usually consist of items that are helpful to a charities cause, but a growing number of items are just trash.

Charities, like Goodwill of Eastern North Carolina, told ABC11 that they spent $785,000 getting rid of donations they simply couldn't take.

While this is a growing problem nationwide, it's also an issue for charities in the Triangle- and Triad-areas.

The Durham Rescue Mission is a social enterprise that recycles many of the donations they receive.

While they can find a use for almost every item they get, Rob Tart said they still spent about $70,000 in 2016 at their three stores and warehouses getting rid of items people donated that were trash.

Tart, the chief operating officer of the Durham Rescue Mission, spoke with ABC11 about how disposal fees could be lowered if people just contacted the organization.

"We would just prefer if people just call us and ask," Tarte said. "Even on our website, we have things listed what we can take and what we can't."

It's the bigger items like grills, microwaves, and TVs that the Durham Rescue Mission can't take that end up costing them more money because they have to take the item to the landfill.

The organization even has the issue of people dumping their household trash into their dumpsters.

Surveillance video shows a car and a moving truck backing up and throwing trash into the nonprofit's dumpsters.

Tart said the Durham Rescue Mission does all that it can to stay open and increase security so that these issues do not happen. Unfortunately, they still do.

"It's people like this that add to the cost that the rescue mission is trying to cut down on," Tart added.

The Durham Rescue Mission is not the only charity that has problems with people donating items that are not usable or in sellable condition; the Triangle Residential Options for Substance Abusers (TROSA) spent close to $30,000 last year on disposal fees.

Jeff Stern, the Director of Business Operations, said TROSA is very grateful for the donations that they do receive, but, he commented, "We really want to be spending money on helping people, not on trash."

That $30,000 they're spending on disposal fees could be going towards helping more people.

Stern explained to the ABC11 I-Team that any item that is broken and not working is typically an item that they cannot fix.

"We don't want to discourage anyone from donating, but it would help if people could just take broken items to the landfill themselves," Stern said.

TROSA said it is in need of these items.

The Salvation Army for North and South Carolina spent $277,000 in 2016 alone on getting rid of unusable donations.

Major Cranford, the Director of Family Stores in the North and South Carolina region, shared with us, "Can you imagine how many people we could serve with $277,000?"

Cranford added, "Our goal is to recycle everything we can. The Salvation Army has been recycling since 1902, but unfortunately, in today's world, not everything can be recycled. Every dollar we use in a landfill is one less dollar we have to help somebody out."

Cranford told the I-Team through some items they cannot take include cribs and car seats.

He explained that car seats could have cracks or be expired which would make them dangerous to sell to customers.

It's items like these that the Salvation Army and other charities get stuck with and end up paying to take to the dump.

For those who want to donate to the Salvation Army, here is a list of approved items.

Charities want and need your donations, but they also cannot afford to spend excess money getting rid of garbage.

That money could be spent to help other people, instead, right now that money is spent on trash.