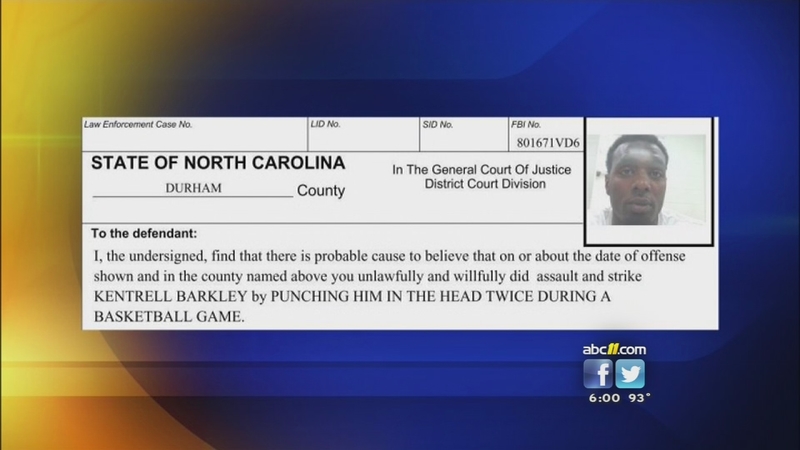 The 17-year-old told ABC11 that Hairston, a former UNC player, punched him twice while they were playing a recreational game.

Kentrell Barkley said he did not throw any punches.

Hairston himself has not confirmed or denied the reports, however, his agent did confirm to ABC11 that an incident did take place and punches were thrown.

"Trying to make a name for himself by competing hard against a NBA player and tempers flared ... This happens in a pickup game, this is nothing new, but just because of P.J. Hairston people making it more than what it seems to be," Juan Morrow said.

Through the Hornets, Hairston released a statement Monday:

"I want to apologize to the Hornets organization and our fans for creating this distraction. As this is now a legal matter, I cannot comment on the situation any further. I am truly sorry for any embarrassment that I have caused."

"Both shoved each other," Morrow said in a telephone interview.

At that point the altercation escalated into punches, the agent said.

Morrow said police were never called in reaction to the incident.

On Monday, Hairston was charged with assault and battery, according to a Durham court official. He will not be arrested, but was issued a criminal summons.

"The organization is aware of the charges filed against P.J. Hairston regarding yesterday's incident. It is a legal matter and we will have no further comment until the legal process has run its course."

ABC11 spoke with the father of the alleged victim who says it is unfortunate a simple game of basketball is now a criminal matter.

"It's just a lot bigger than a simple assault," said Ken Barkley. "It didn't' have to be P.J. that assaulted my son. It could've been anybody and I would've taken the same steps. Right is right. And wrong is wrong."

Sunday's incident is just the latest in a series of problems for Hairston that date back to his days playing at UNC. Here's a timeline of what happened: