All the stuff you need to know from ACC Operation Basketball 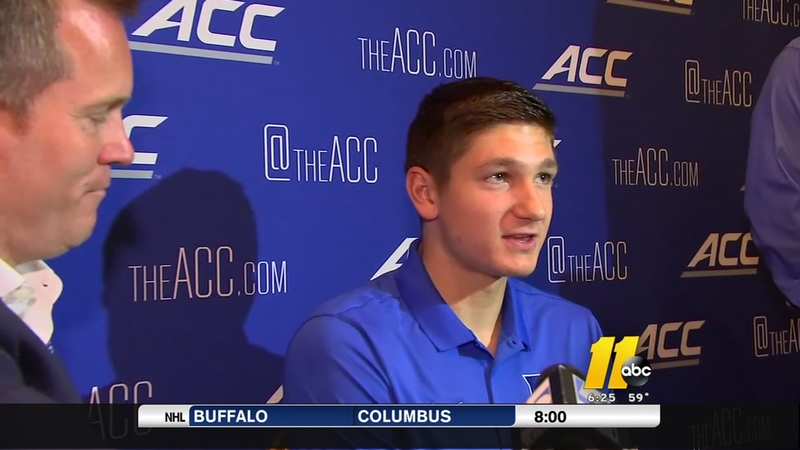 Players kicked things off Wednesday morning and then the afternoon will belong to Commissioner John Swofford and the coaches.

The results of the ACC Preseason Poll won't be released until Thursday - but we know that Duke will be the choice to win the league, again.

At the center of the Blue Devils, their lone senior and captain, Grayson Allen. Nobody knows more about living in the middle of the college basketball cauldron, for better or worse than Allen.

Any conversation with him begins with his past troubles, so I tried to get therapeutic with him as he tackles a new season:

Grayson Allen on harnessing the power and the danger of his emotions/competitive streak: pic.twitter.com/RHc8eezATT

The tripping aside, Allen spoke plenty about the unique challenges of blending a new team each year. He's basically lived inside the beaker of one-and-done college basketball experimentation his entire career.

He acknowledged it's not easy starting almost fresh each season, but given the choice to have or not have guys like Marvin Bagley and Wendell Carter, he'll definitely take them. Allen said Bagley's size was what first jumped out. "He's actually 6'11".

Allen has the captaincy back this season. I asked him if there was any meeting with Mike Krzyzewski where expectations were laid out as to what was expected of him as the lone senior:

Here’s Grayson on getting the captaincy back and convos with K: pic.twitter.com/JOkFTVBosi

It was fun speaking with Lennard Freeman about the appreciation he has for the game following a year away.

Freeman said college hoops seemed like a job in his early years, but after enduring last season from the bench, he said he feels refreshed and energized, especially with Kevin Keatts at the helm now.

Freeman said Keatts has an indescribable vibe and didn't need to sell him much on sticking around. "We've got shared values, I see him already as a father figure."

Lennard used to go by "Feathery Nard". I've been wanting to ask him for a couple years for a definition of "feathery". Today I got it:

I seek out the stories we all need to know. Here’s @NardFreeman_ on the definition of “feathery”: pic.twitter.com/WGRKy2IHIo

Al Freeman talked with me about the character of this year's team.

"Gritty" was the word he used. Freeman said Keatts came in and described his attitude with two words. "I win." These guys all seem convinced they're in the right hands with Keatts.

Freeman obviously couldn't compare between now and previous teams but he stressed that this Wolfpack group will fight. "A 5 point (deficit) won't become 10. 10 can't become 15."

Given the relative competitive spinelessness of last year's team, that would obviously be a huge, controllable step forward.

Joel Berry got his name in the rafters courtesy of last season's National Title and his performance as Most Outstanding Player at the Final Four.

On Monday, he joined another select group: key Tar Heels who've had to miss time with injuries early in the season of late. Marcus Paige, Theo Pinson, Kenny Williams. It's become a Carolina tradition of sorts.

On Wednesday, we learned that Berry broke his hand after punching a door because he lost a video game to teammate Theo Pinson.

"He did a silly thing," head coach Roy Williams said.

Roy said “You gotta be kidding me,” when he learned the news Joel Berry had broken a bone in his hand after losing in a video game. pic.twitter.com/CJ6JBEJLRN

Being without Berry is clearly not optimal, but given the relative time-frame involved, there's nobody too concerned.

The prevailing sentiment is that it creates forced opportunity for the likes of Seventh Woods, Jalek Felton (and others) to find increased confidence in Berry's absence.

Pinson said Berry is definitely the team's pit bull in terms of mentality, but in his absence Kenny Williams and Luke Maye will be responsible for maintaining the competitive fire. (Williams was a surprise to me here)

Pinson said the team motto this season is "Why Not?". As in, why not go to a third straight title game.

Why not repeat as National Champs? It's an obvious goal, if somewhat unrealistic seeming right now given the personnel that's moved on.

Luke Maye looks every bit the confident starter and who can blame him after his tournament heroics last year.

Asked about having to defend 5's when UNC goes small (which is likely plenty), Maye just said "they'll have to defend me too". It'll be interesting to see him asked to do more, game in and game out this year.