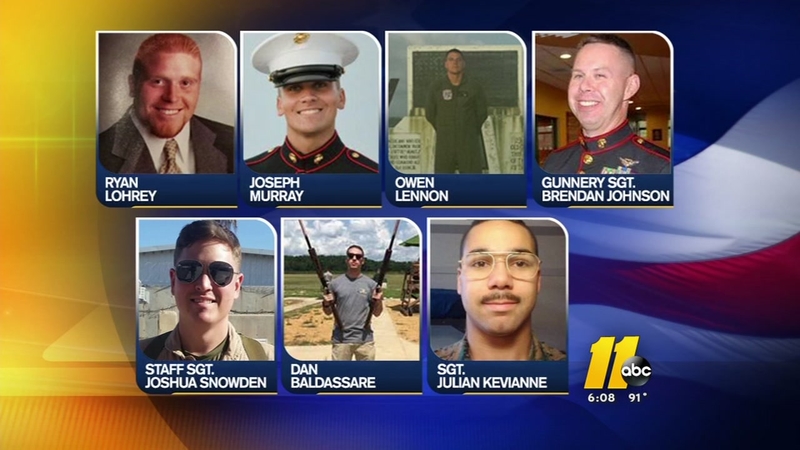 7 based at Camp Lejeune identified after crash

In a news release Tuesday afternoon, the Marine Corps said six Marines and a sailor from Camp Lejeune were among the dead.

Officials hold a news conference on the deadly Marine plane crash that originated from NC.

Leflore County Emergency Management Agency Director Frank Randle told reporters at a late Monday briefing that 16 bodies had been recovered after the KC-130 spiraled into the ground about 85 miles north of Jackson in the Mississippi Delta.

These seven MARSOC service members were from the elite 2d Marine Raider Battalion based in Camp Lejeune. They were part of a 14-person team that was headed to Yuma, Ariz., for routine pre-deployment training.

The other seven arrived in Yuma the day prior to the crash to set up. The seven service members on board the KC-130 that went down Monday were the second half of the team, coming out with cargo, body armor, radios, weapons, and small-arms ammunition.

Mannweiler described MARSOC as a close, tight-knit community that is really feeling the loss of these seven service members. MARSOC, totaling 2,742 people, is the smallest component of U.S. Special Operations Command.

According to many vets, the C-130 family of aircraft are among the most reliable in all US military, w/ stellar safety record. @ABC11_WTVD pic.twitter.com/RfJzr7d4aT

The crew and passengers consisted of 15 Marines and one Navy Corpsman. The identities are still being withheld to allow time for their loved ones to be notified. Cherry Point officials confirm to ABC11 that CPMCAS has no information indicating any Cherry Point Marines were on the plane.

According to Marine Corps officials, the Federal Aviation Administration contacted the Marine Corps when the aircraft disappeared from air traffic control radar over Mississippi.

Officials said the squadron was "supporting a requirement to transport personnel and equipment from there to Naval Air Field El Centro, California."

Equipment on board included various small arms ammunition and personal weapons. An Explosive Ordnance Disposal team is at the scene as a safety precaution.

Mississippi Gov. Phil Bryant is warning people to not remove debris from the area where the plane crashed.

Bryant, in statements Tuesday on Twitter, said law enforcement authorities have received reports that items are being taken from the crash site. Debris from the KC-130 that crashed Monday is scattered for miles.

Sheriff's deputies and state troopers have been trying to control access to sites, but the broad area and number of roads makes that difficult.

Bryant asked people to stay away and turn debris over to authorities. He warns that anyone taking something could be prosecuted.

Andy Jones said he was working on his family's catfish farm just before 4 p.m. when he heard a boom and looked up to see the plane corkscrewing downward with one engine smoking.

"You looked up and you saw the plane twirling around," he said. "It was spinning down."

Jones said the plane hit the ground behind some trees in a soybean field, and by the time he and other reached the crash site, fires were burning too intensely to approach the wreckage. The force of the crash nearly flattened the plane, Jones said.

"Beans are about waist-high, and there wasn't much sticking out above the beans," he said.

Jones said a man borrowed his cellphone to report to authorities that there were bodies across U.S. Highway 82, more than a mile from the crash site.

Greenwood Fire Chief Marcus Banks told the Greenwood Commonwealth that debris from the plane was scattered in a radius of about 5 miles.

Jones said firefighters tried to put out the fire at the main crash site but withdrew after an explosion forced them back. The fire produced towering plumes of black smoke visible for miles across the flat region and continued to burn after dusk, more than four hours after the crash.

Aerial pictures taken by WLBT-TV showed the skeleton of the plane burning strongly.

The plane could be seen burning and producing large clouds of black smoke from Highway 82.

"It was one of the worst fires you can imagine," Jones said. He said the fire was punctuated by the pops of small explosions.

The cause of the crash is unknown at this time and remains under investigation.

The KC-130T model dates to 1983. It is only being used by the reserve unit at Cherry Point. All other military, including USAF, uses the newer KC-130J model.