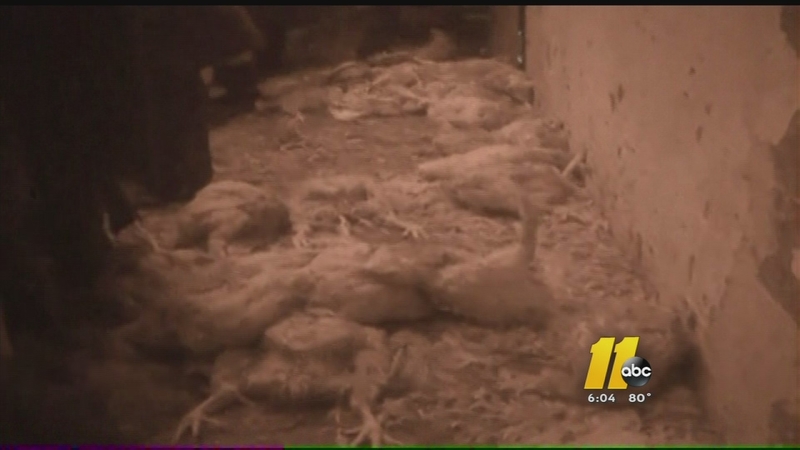 RALEIGH (WTVD) -- New video obtained exclusively by ABC11 that purports to show animal cruelty at a Robeson County poultry farm perfectly shows what could be lost if a new bill in the North Carolina legislature becomes law.

"We're seeing workers who are punching birds and throwing birds around," said Erica Meier with the animal rights group Compassion Over Killing. "There are sick and injured birds who are pulled out of the slaughter line and dumped onto a dead pile that includes not only dead birds but dying birds and they're just treated like trash."

Meier's group hired an undercover investigator to get a job at Mountaire Farms and take video showing abuses there. And it's exactly that scenario that the new bill targets: video or pictures taken by someone who gets a job specifically to showcase wrongdoing.

"It aims to stop whistleblowing exposes," Meier said. "It aims to stop undercover investigations that are unearthing these violent acts of abuse against animals behind the closed doors of animal agribusiness."

Supporters of the bill say it wouldn't have a chilling effect on whistleblowers because it wouldn't affect people who are already employees and see bad behavior at the workplace.

"If this were an 'ag-gag' bill, I would not be anywhere near it," said one of the bill's sponsors two weeks ago.

At its core, NC House bill 405 pits consumers' right to know against businesses' right to privacy.
And it wouldn't just affect agribusiness. The bill would apply to all companies in North Carolina (think: day care, adult care, education, environmental, etc.)

Vinnie Doria owns The Twisted Mango in Raleigh and while he says he thinks videos showing abuse can be helpful, as a business owner, he sees value in the protections offered by the bill.

"I'm not in favor of someone coming in, illegally and unannounced and trying to find something," Doria said. "Because sometimes, they'll misinterpret what they're seeing and they'll blow it up to be something that's not really the case."

A couple of Doria's customers saw it differently. "I say investigate them," said Willie Watkins. "If it's wrong, it's wrong."

"Just do what you're supposed to do," said Watkins' friend Walter Williams. "If it's the right thing at whatever job it is, do the right thing so you don't have to worry about people making videos of you doing something that's wrong."

Meier says the video violates animal protection laws. Her group, Compassion Over Killing, has taken it to Robeson County's district attorney asking for an investigation.

HB405 has passed the House and is now in the Senate.