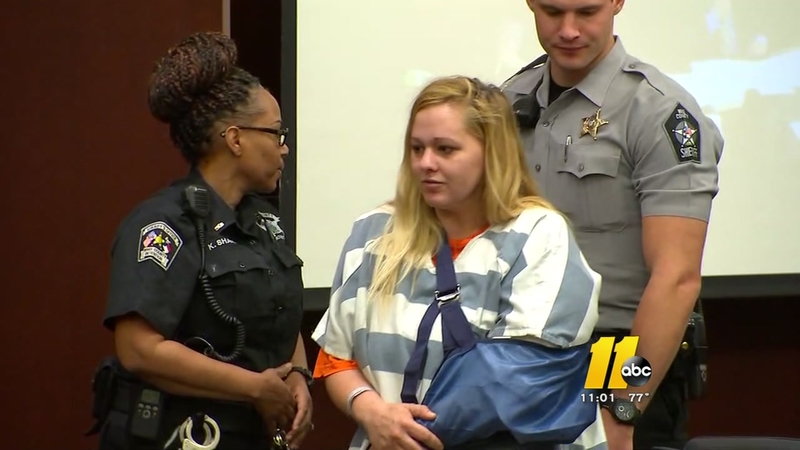 Emotional rambling in court from mother accused of child abuse

RALEIGH (WTVD) -- A 5-week-old baby girl is fighting for her life. Earlier this week, she was brought into Rex Hospital where doctors determined that she has a fractured skull and a brain bleed.

She said she has known Schmidt for three years and that Schmidt was trying to move back to Raleigh from Asheboro and would come over with the baby whenever she was in town job hunting.

When Jacob-Spencer got off from work early Wednesday morning, she said she went right to bed. A while later, she said Schmidt woke her to tell her she had fallen on a chair that the baby was in and asked if she could check on the baby.

She said they tried to give the baby a bottle but she didn't want it. Overall the baby seemed fine.

Later in the day, that would change.

Wednesday evening, Jacob-Spencer said Schmidt told her she wanted to go out for drinks and asked if she would babysit. When Schmidt was in the bathroom getting ready, that's when Jacob-Spencer said she noticed something was off with the baby.

"Something is wrong," said Jacob-Spencer, who then wanted to go to the hospital.

Jacob-Spencer said by that time Schmidt had taken prescription drugs, something she said happens often.

Worried about the baby, and confused by what Schmidt was saying, Jacob-Spencer proceeded to take them to the hospital and said there was no story to get straight and that they just needed to get to a doctor.

She said when they arrived, doctors ran several tests and told Schmidt the baby had blunt force trauma and a brain bleed. That's when Schmidt became hysterical and security had to restrain her.

"I remember feeling angry at her," Jacob-Spencer said. "When you see it on T.V. you never think it will happen close to home. I will never come back from this."

Police were then notified by someone at Rex Hospital, who called 911. The caller told the 911 dispatcher that they were treating a possible shaken baby case.

On Friday, Schmidt faced a Wake County judge for her first appearance. She was wearing a sling on one of her arms. The assistant district attorney explained to the judge that Schmidt was hurt while at the hospital where he said she was also trying to get her hands on some pills. He said she became combative with authorities and fell off a gurney.

While in court, Schmidt asked the judge if she was allowed to speak. The judge said that she was but did not have to and warned that if she said anything incriminating it could be used against her.

Schmidt then proceeded to tell the court how much she loves her baby. She said she's never hurt her child and that she also has a 4-year-old son who has never been hurt.

"I was told I couldn't have kids and when I was pregnant I was held at gunpoint and robbed, and I named her Grace because by the grace of God she's here," Schmidt told the judge. "I don't know what to do, I've never been in trouble, I've never touched a child, in a, in a, she's my angel."

The judge appointed Schmidt a public defender and set her bond at $500,000. That's when the assistant district attorney chimed in asking that the judge raise that to $2 million. He said this could potentially become a case where the child dies and could become a murder case rather than a felony child abuse case.

At that point, Schmidt became visibly emotional. The ADA went on to say there is evidence she tried to get a witness to change their story, or get their story straight before they brought the baby to the hospital. He also said the baby was brought in to the hospital because the witness wanted to bring her in, not because Schmidt thought of it.

According to Jacob-Spencer, she is that witness the ADA was referring to.

Schmidt went on to say that she told her friend she thought the baby looked yellow and possibly had jaundice and that's all she noticed that was wrong.

"How do I know if she's OK or not, I don't understand this," Schmidt continued.
She told the court that a friend and relatives have helped care for the child while she looked for work. She also told the judge about a time when the baby fell off the couch about a month ago.

The judge decided to raise her bond from $500,000 to $2 million. If convicted, the abuse charge carries more than a 30-year sentence.

The judge also ordered that Schmidt not have contact with children. Her 4-year-old son is staying with his father, Jacob-Spencer said.

As for the father of the 5-week-old baby, Jacob-Spencer said he's not in the picture.

Schmidt's next court date is Sept. 8.