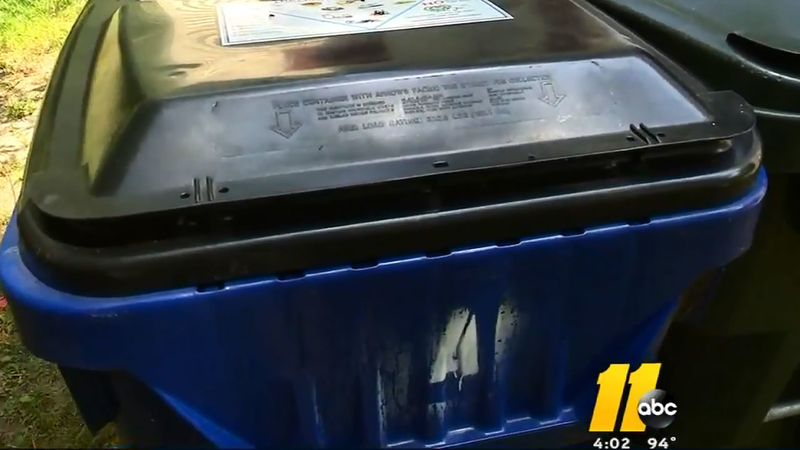 RALEIGH (WTVD) -- A family friend says a boy found in a Raleigh recycling bin is doing well despite the trauma of what allegedly happened to him.

The two parents of the child - described as 9 years old in court documents, but the family friend says is actually 8 - are charged with abuse.

Raleigh resident Melissa White said she went to the recycling bin next to her townhome to drop something in and found the boy.

White said the boy told her he was living in the woods in the park at the Green Road Community Center in North Raleigh with his homeless mother and stepfather.

Police said he was being repeatedly beaten by the stepfather and during one of those beatings (with a belt) Friday evening, he got away, ran through the woods into an adjacent neighborhood, and jumped inside the big blue recycle bin.

"He was scared half to death. He was like, 'Please don't let them take me back,'" said White.

Leroy Blake, 25, and Jillian Randel Davis, 29, are both charged with child abuse causing serious physical injury. Bond was set at $50,000.

The boy and his infant brother have been placed with an aunt and her husband and daughter. Family friend Tonya Greene said the couple have the kind of family the boys need. Greene said they are surrounded by love and the new family is helping the 8-year-old get through the crisis.

"This is just going to be an event in his life and that's how we are going to treat it. He is destined for greatness. I see it. The fact that he survived, the fact that he is where he is and is able to articulate his story, and be brave - that speaks a lot about him and the plan that God has for his life," said Greene.


Greene said the family is in need of donations for the children. She described it as being like suddenly having a baby without the baby shower.

The drop-off location is:

They need clothing and baby supplies:

Monetary donations can be made at PNC Bank to the "Captain Jason fund".