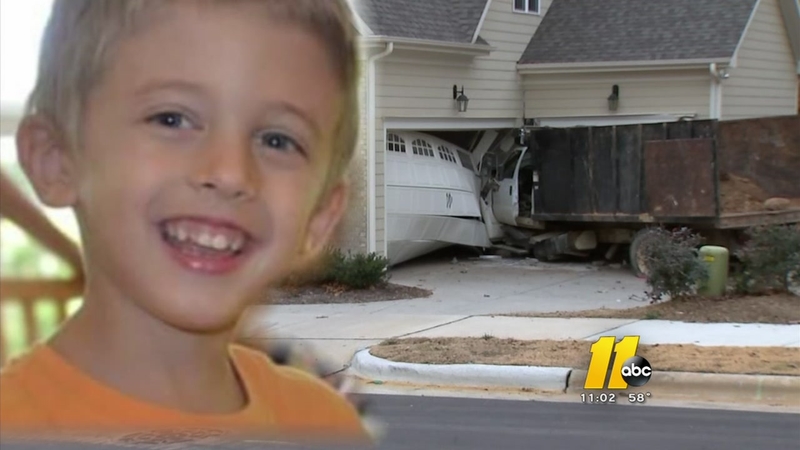 ABC11 will not air the calls due to their graphic nature and out of respect to the family.

The transcript, however, shows an obviously stunned father of William Everett Copeland telling a 911 operator that "a truck hit my child."

In another call, an upset, shocked, and angry neighbor is heard asking others about the identity of the driver.

Investigators confirm the accident took place on Dogwood Bloom Lane in Hillsborough's Forest Ridge subdivision, a new neighborhood not far from U.S. 70, where homes under construction are mixed with finished ones.

The developer, Crescent Communities, says Forest Ridge will have about 230 homes, and only about 50 of them are completed now.

A group of children was playing in the driveway and the 5-year-old boy - who went by the name of Everett - couldn't get out of the way. The truck hit him before crashing into the home. Neighbors said a doctor who lives in the neighborhood ran over to help; she performed CPR until emergency crews arrived.

Even though Suarez was not behind the wheel of the truck as it struck the boy, he was named as the responsible party. A legal expert says the court can find Suarez responsible of gross negligence.

"At this point, we don't believe the vehicle was properly secured," said Chief Hampton. "We will also be following up the investigation, looking at the mechanical condition of the vehicle and confirming all of the working relationships, regarding specifically which company the crew was working for."

As for Suarez and his employer, investigators concede there are many layers of responsibility when it comes to construction. The land developer, Charlotte-based Crescent Communities, sells lots to several home builders and designers. Those designers then hire several companies tailored individually to their trades: plumbing, electric, roofing, siding, kitchen, bath, and more.

Wilbert later sent an update to ABC11, asserting that Suarez was not hired by Crescent or any of its affiliates, and thus was hired by one of the companies down the chain. Crescent management is also working with local officials to halt all construction work out of respect to the family and the ongoing investigation.

Calls to several developers currently into construction in the Forest Ridge community went unanswered Tuesday and emails were not returned.