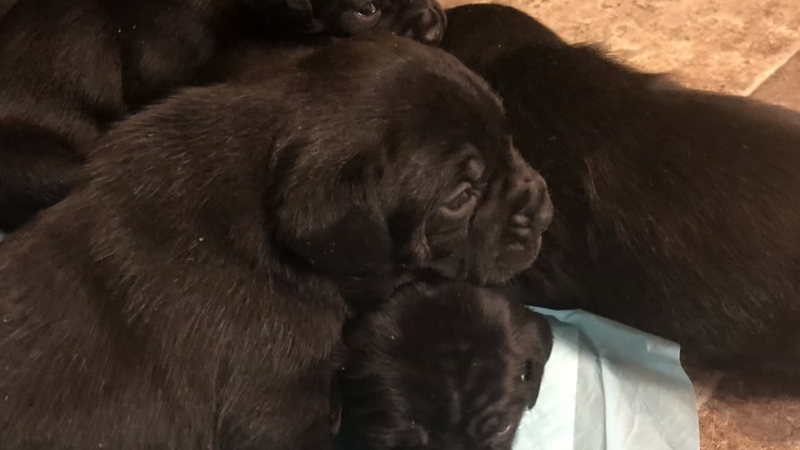 GOLDSBORO, N.C. (WTVD) -- Wayne County Sheriff's Office is investigating after six puppies were stolen during a home invasion in Goldsboro.

Amber Hinson said somebody broke into her home on Pate Circle Saturday morning and snatched six puppies, about half a dozen presents under the Christmas tree along with a rifle and safe.

She posted about it on Facebook, asking everyone to be on the lookout for the puppies.

The Labrador-Pug mixes were only four and a half weeks old. The thief left behind one puppy Hinson calls "Little Pal" and his mom, Gracie.

"I love them," Hinson said. "There were seven of them and now it's hard because I'm like, wait there's only one of them."

Amber Hinson, of Goldsboro, said someone broke into her home Saturday & snatched 6 puppies, 6-7 Christmas presents, a rifle & safe. The Lab-pug mixes were only four and a half weeks old. If you have any info, contact Wayne County Sheriff’s Office: 919-731-1481. #ABC11 pic.twitter.com/UY3PpGwl3D

Hinson reported the crime and the Wayne County Sheriff's Office is investigating. Hinson said the burglar busted in the door and she had to replace it.

She's most worried about the dogs.

"They're not going to be able to be properly taken care of so I feel that they would not make it," Hinson said. "If I knew they were probably being taken care of, it wouldn't be so bad but they're not completely weaned off the mom yet and so it's really hard because I don't know if they're being fed. They probably don't have the milk replacement that they need so they're not getting those nutrients."

If you have any information, please contact Wayne County Sheriff's Office at 919-731-1481.