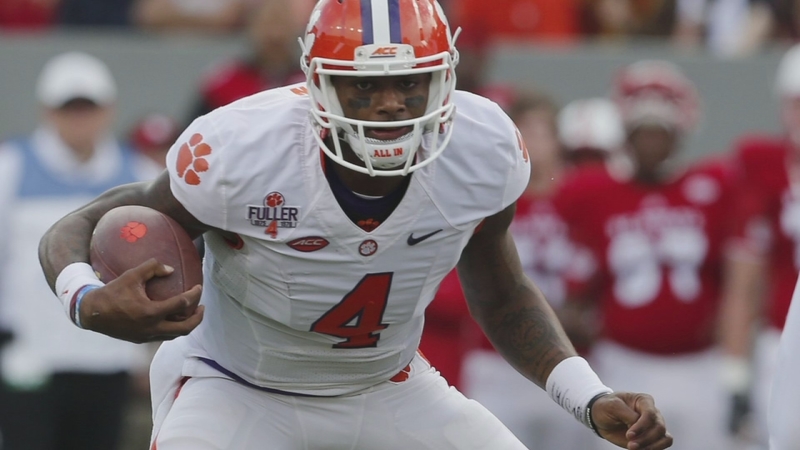 The Wolfpack, which led three different times in the first half, did enough on offense to pull off another upset of a top 10 ACC heavyweight.

But the defense couldn't stop Clemson (8-0, 5-0 ACC) or quarterback Deshaun Watson as the Tigers rolled up 623 yards of total offense and Watson had a hand in six touchdowns.

"Of course, they're a great team," senior safety Hakim Jones said. "They're the (No. 3) team in the nation but at the same time we have to compete with them better than we did."

Wolfpack coach Dave Doeren would have signed up for 41 points before the game. The Tigers allowed 14.5 points per ACC game and were coming off of a 58-0 whitewash of Miami.

"I would have said if we score 41 points tonight we'd have a chance to win the game but we just gave them too much," Doeren said.

Clemson coach Dabo Swinney told his team every game wouldn't be as "beautiful" as the rout of Miami was last week.

"Sometimes you've got to put lipstick on a pig and you've got to roll with it -- that's your date for the night," Swinney said. "That's kind of the story of the night. We made enough mistakes to lose the game but we made plenty of plays to win."

After a 41-0 loss at Clemson last year, N.C. State took Saturday's result as a bit of progress.

"We gave them some adversity and they're a great team and they rose to occasion," senior defensive end Mike Rose said.

The first half, when the Wolfpack led 6-0, 13-7 and 20-19 it felt like it had a chance to knock the Tigers out of the College Football Playoff race.

"It felt like it was coming together," Rose said. "Like the Florida State win (in 2012), everything seemed to just happen like a movie. It was starting to look like that and then momentum swung the wrong way."

The momentum shifted at the end of the first half after running back Matt Dayes got hurt on a third-down play and kicker Kyle Bambard missed a 44-yard field goal with 55 seconds left in the half.

Instead of possibly taking a 23-19 lead into the break, Watson quickly hit two long passes, a 31-yarder to Artavis Scott and then a 42-yard touchdown to Charone Peake, to give the Tigers a 26-20 lead at the half.

"I think he's a really special player," Doeren said. "He was coming out of high school, and he has been every time he has been healthy down there."

With Dayes sidelined in the second half with a toe injury, N.C. State's offense couldn't keep up with the Tigers, who also got 172 rushing yards from running back Wayne Gallman.

Senior quarterback Jacoby Brissett threw for a season-best 254 yards and three touchdowns for the Wolfpack. Jaylen Samuels, who filled in for Dayes in the second half, had a 66-yard run set up a 1-yard touchdown in the third quarter, which cut Clemson's lead to 33-27.

But the Tigers scored the game's next 14 points thanks to Watson - a 40-yard TD pass to receiver Deon Cain and a 35-yard pass to running back Zac Brooks.

All five of Watson's touchdown passes were longer than 35 yards. The big play hurt N.C. State's defense, so did Clemson's raw talent.

"They just have some athletes," Rose said. "They have really talented receivers and their running back runs really hard. Their skill positions really make the difference with their team."

Clemson's on its way to a showdown with No. 17 Florida State next week and has an eye on the national title race.

For N.C. State, after its third ACC loss in four tries, it will try to build on the progress it has made in a year in two Clemson games.

"From last year, it was a big jump up," Brissett said. "We had that game won, we just have execute a little bit more down the stretch."