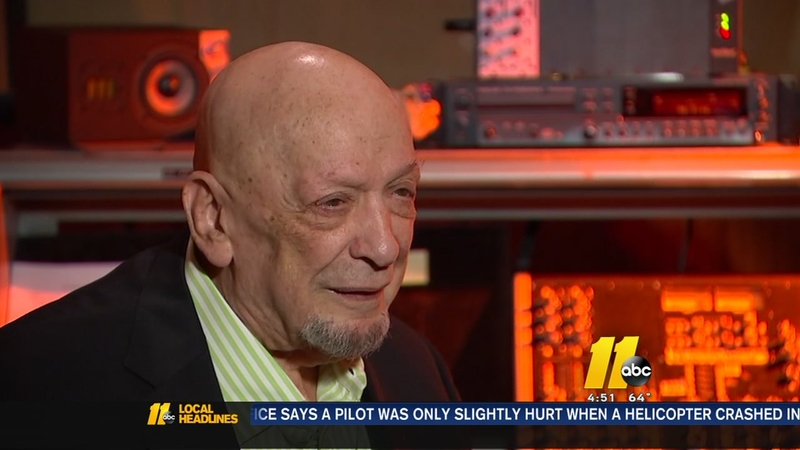 Fred Foster moved nostalgically through Historic RCA Studio B sweeping his fingers over a piano that has been played by the likes of musical legends.

"You wouldn't believe the magic that happened in this little room," he said.

Decades have passed since that magic turned the iconic Nashville recording studio into the home of more than 1,000 American hit songs.

The 85-year-old record producer and label owner did not know it then, but he was helping create the Nashville Sound.

"There's no feeling in the world. Unless, it's maybe like birthing a child," said Foster.

Foster loved music as a young boy living in Rutherford County, North Carolina where he worked on his family's farm.

"When the other kids would be out dancing, I'd be listening to the band," he said.

At 17, he left home for Washington, D.C. and started writing songs while working in the food industry.

His ear for unique talent almost ushered in one of the biggest signings in music history the first time he heard Elvis Presley's "You're Right. I'm Left. She's Gone" on the radio.

"I pulled over, stopped, turned up the volume and said, 'Woah!' This is the real deal here!'"

But Talmadge would not budge.

Presley was signed by RCA. His first single there, "Heartbreak Hotel", became a number-one hit in the United States.

"I got to know Elvis, and he thought that was a funny story," laughed Foster.

Foster eventually decided to go out on his own and launched Monument Records in 1958.

"I had to find a song because, without a song, you might as well stay home. I knew I wanted someone who sounded identifiable immediately," he said.

It was not long before Foster found what he was looking for in Billy Grammer.

"He was very capable of holding an audience. He was a great guitar player. So, I called him and said, 'You want to be the first Monument artist?'"

Grammer signed on, and the partnership blossomed into Monument's first big hit, the million-selling single "Gotta Travel On".

Foster moved his label to Music City in 1960 and helped launch the career of another legendary singer-songwriter, Roy Orbison.

The pair went on to make more than a dozen consecutive hits, including "Only The Lonely (Know How I Feel)" and "Oh, Pretty Woman".

"It's a combination that works, and when you got one that works, don't change," said Foster.

WATCH: The Making of "Only The Lonely"
EMBED More News Videos

WATCH: The Making of “Only The Lonely”

Foster also co-wrote "Me and Bobby McGhee" with Kris Kristofferson.

WATCH: The Making of "Me and Bobby McGhee"
EMBED More News Videos

WATCH: The Making of “Me and Bobby McGhee”

After performing three songs, he offered to sign her to his label.

Foster's unique philosophy landed him one of the highest honors in country music last month when he was inducted into the Country Music Hall of Fame.

He accepted the award at the CMA Theater alongside Charlie Daniels and Randy Travis.

All three 2016 inductees are from North Carolina.

"The Tarheel invasion," Foster smiled. "Gotta be something in the water."

Advice to aspiring songwriters and producers

Foster credits his humble beginnings with the timeless tunes that composed one of the richest careers in country music.

He said he learned one of his best life lessons from his father.

"I'm jabbering away one day and he said, 'Stop. You gotta quit talking so much.' I said, 'Why?' He said, 'You'll never learn anything while you're talking.' So I became a listener."

Foster wants to be remembered as "a songwriter's friend."