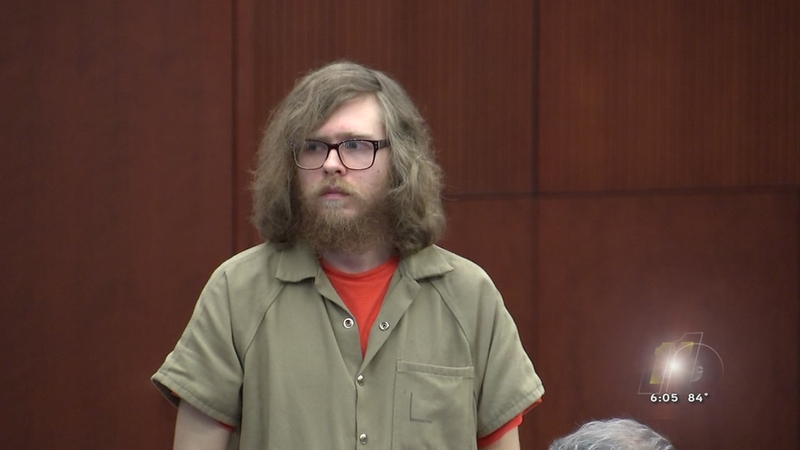 RALEIGH (WTVD) -- Matthew Phelps, a Raleigh man who told 911 dispatchers he thought he stabbed his wife to death after taking too much cold medicine, pleaded guilty to first-degree murder in a Wake County courtroom Friday morning.

He will serve a sentence of life in prison without the possibility of parole.

The family of the victim, 29-year-old Lauren Phelps, were present in the courtroom. For hours, family members gave emotional impact statements.

"The last time I was at Lauren's house, the walls were painted, the carpet was replaced. All the furniture was moved out. There was nothing left," Lauren's mother said. "I laid down on the spot where Lauren was murdered and I was outside of my body. I couldn't believe the animalistic cry I was hearing."

Matthew entered court looking very different than we first saw him in 2017. Friday he had long hair and a large beard.

Matthew was sat quietly for the majority of the hearing. But at the end, when given an opportunity to speak, he turned to Lauren's family and apologized to them for what he did.

"I am sorry that I took away Lauren's life. This was a senseless and mindless act, and I regret every step that led me in that direction. I consider my own life worth nothing in the shadow of the tragedy weighing over my mind and on the hearts of so many people in this room today. I feel like a monster," Matthew said. "I hope my life will be an example of the consequences for those who think that drinking, drugs, and carelessness will only affect themselves and noone else."

Matthew finished his statement by looking at Lauren's family and saying "I hope you will begin to see that I am doing everything I can from here to show you that I am sorry."

"I am sorry that I took away Lauren's life...I feel like a monster."

Before Matthew's apology, prosecutors chose to play the 911 call from the night Lauren was killed. Friends and family seated in the courtroom fought back tears.


An autopsy report revealed Lauren had been stabbed 123 times.

The report stated she died from multiple stab wounds to her face, neck, torso, arms, and jugular vein.

Officials said when they found the victim, on Sept. 1, 2017, she was in the fetal position on her bedroom floor.

She was taken to WakeMed where she later died.

Phelps, 29, claims he was on cold medicine at the time and doesn't remember what happened.

"I have blood all over me and there's a bloody knife on the bed, and I think I did it. I can't believe this," he said during a 911 call.

Prosecutors said Friday that prior to the 911 call Matthew made a "calculated effort" to clean up his wife's blood. They say that discredits Matthew's theory that the murder was the result of taking too much cold medicine.


UNC professor: It's 'plausible' too much cold medicine caused Raleigh man to kill his wife

In that 911 call, Phelps claimed he had a dream that he killed his wife. When he woke, he found himself covered in blood, with Lauren's body on the floor.