10 things to watch in college hoops 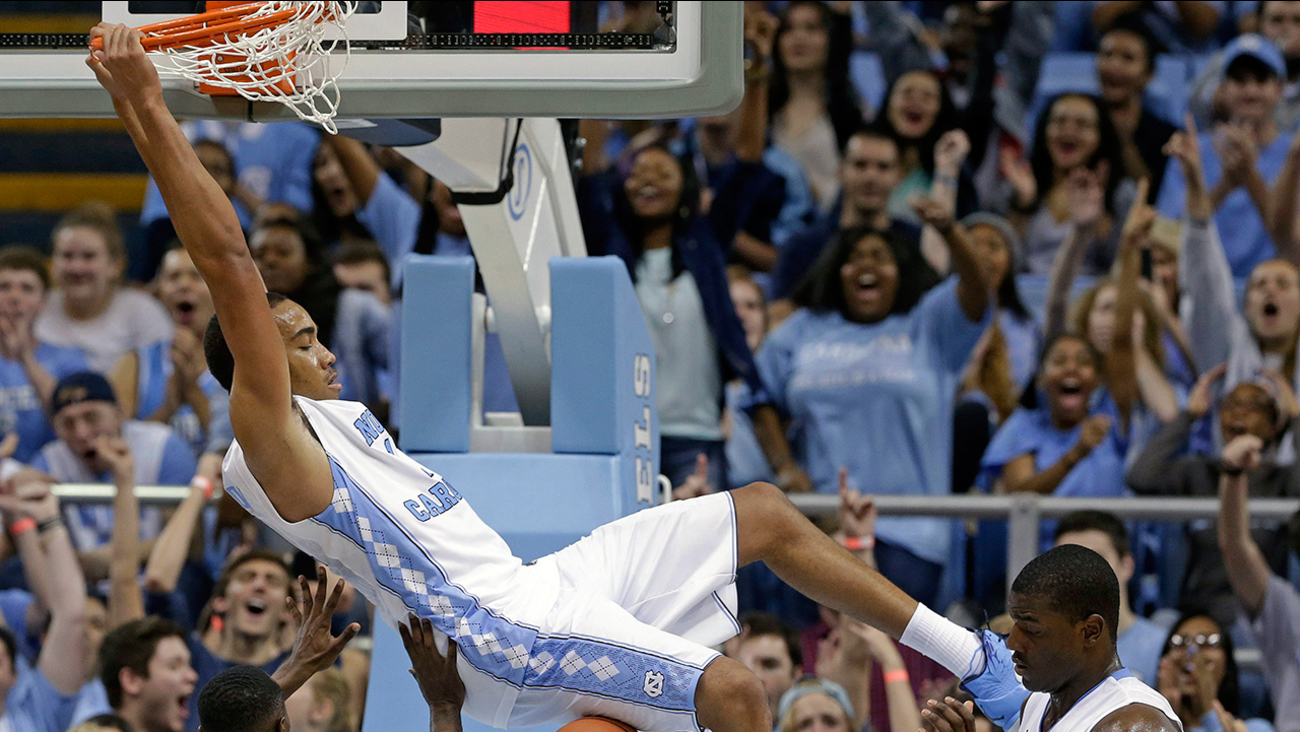 This year, like every year, has the potential to be a banner season in Triangle basketball. That's a literal statement in our case - because (yet another) banner could be hung if things fall into place this season. The madness kicks off in earnest tonight with all three Triangle ACC teams and NC Central starting their seasons. That in mind - here are 10 things to watch in local college hoops this year.

1. Seems only fitting to use #1 to talk about the preseason #1 team in the land. Carolina has that honor based on the plethora of returning talent they return this season. The Heels are stocked with what I'd call 'very good college players', upperclassmen like Marcus Paige, Brice Johnson, Kennedy Meeks et al. There's a reason none of these guys bolted early for the NBA, but they can all play at a high level. They are known quantities that ensure a high measure of success this sure. If UNC wants to wind up #1 though and win championships (starting with the ACC), it all depends on...

2. Their sophomore class. Along with the world at large, I'm expecting big things from Justin Jackson this year. It wouldn't even surprise me for him to become offensive option #1, ahead of Marcus Paige. The Heels should get balanced scoring from a number of spots this year, but when it comes down to needing a bucket, that's on Jackson and Paige imo. These few weeks with Paige shelved will presumably give us a chance to see Jackson in a more alpha dog role. More specifically though, I'd expect to see lots of Joel Berry and Theo Pinson. Both were bigtime recruits. Both false started their freshman season (largely due to injury). Their level of play is what'll turn UNC from a contender, into a title team.

3. Take everything I've said so far, mix in some Nate Britt, Isaiah Hicks and Joel James, and it's clear that UNC is has talent and experience from top to bottom. There is simply no excuse for them to muddle around at the start of the season like we've seen in seasons past. They may get beat by someone, but don't give me a blowout loss that ends with everyone once again questioning the team's toughness and Roy Williams muttering that he needs to coach better at the postgame press conference.

4. The defending champs will obviously have an entirely different look this year. Gone is that spectacular freshman class. In previous seasons, Mike Krzyzewski has made it clear at the start of the season who'd carry the mantle of stardom. Two years ago, it was Jabari Parker and Rodney Hood, last season things began with Jahlil Okafor (and obviously expanded at various times to the rest of the frosh class). This year K told me the team will built around the upperclassmen. Clearly, the leadership of the team will generate from the likes of Amile Jefferson, Marshall Plumlee, Matt Jones etc, but a team where those guys are the go to guys is not a team to win big. In that vein... 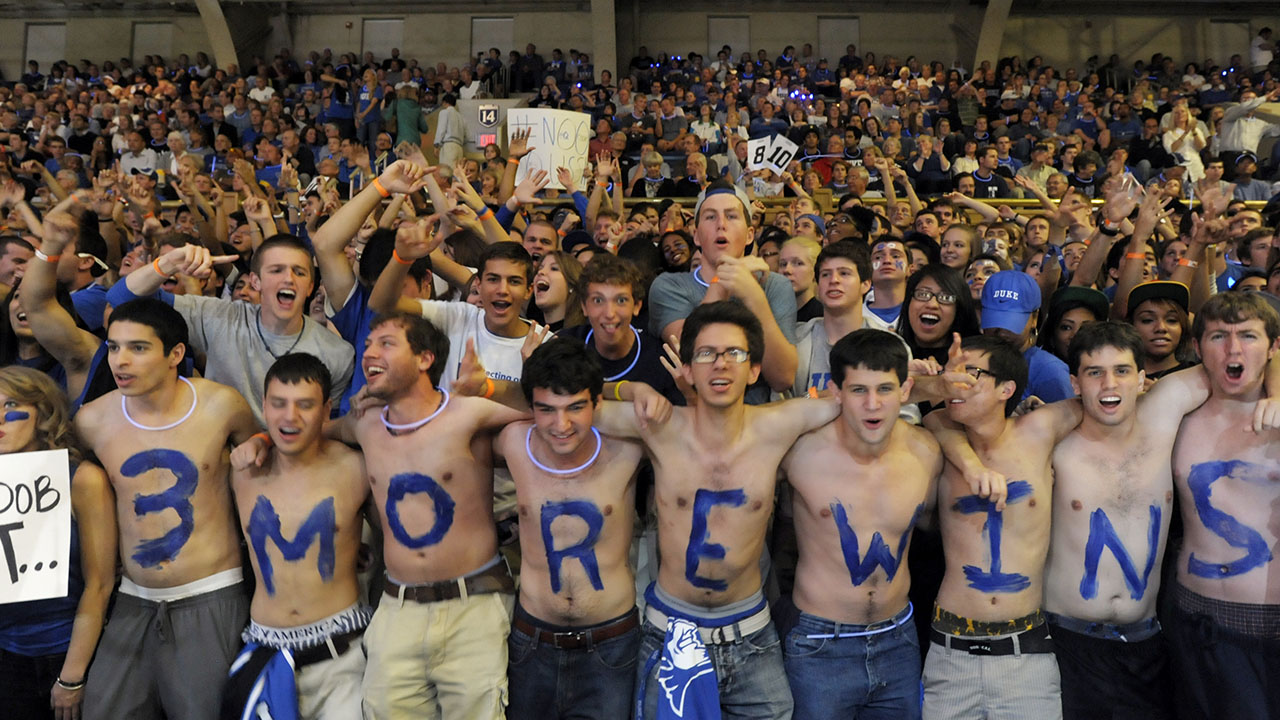 5. Who will emerge as a star among the freshmen? Brandon Ingram's the obvious choice here. I called him the personification of the word 'spindly' the other night. That's both a good and bad thing. Ingram is like a one man tarp at the head of the Duke fullcourt press, seemingly covering the entire halfcourt with his arms. The one exhibition I attended, he had mixed success finishing through contact. Don't get me wrong, he also made many spectacular things happen, but I'm certainly curious to see how his game takes shape against other top teams. He's got a sleepy persona that I imagine will change a bit over the course of a season in the Duke program. Guys like Derryck Thornton and Luke Kennard figure to have moments, but I'll be surprised if anyone other than Ingram emerges as the top threat.

6. Justise Winslow brought a different physical element to last year's team. Sure, nobody else had a Jah, but it was Winslow who often looked the best player on the court in March. He was the snarling dog of the group, an intimidator and finisher. Not sure there's a guy like that in this Duke group, but the closest thing would maybe be Grayson Allen. K called him a 'violent' jumper. He's got that next level athleticism that Winslow possessed and a nasty streak on the court that should come in handy.

7. At State, it's about 2 primary guys, Cat Barber and Malik Abu. Barber's gone from an up and down one trick pony to much more of a finished product. He's the guaranteed star of this year's team, a guy that can both facilitate and finish. We saw the progression in his shooting last year. Consistency from Cat was another big step. That'll continue as he becomes potentially the best point guard in the entire league.

8. Abu's had the build from the get go. As Mark Gottfried made clear when Abu arrived, it's all about figuring out how to put those gifts to most efficient use on the basketball court. I'm expecting a major step on that front. As with Carolina, you pretty much know what you're going to get out of BeeJay Anya, Lennard Freeman and to a lesser extent, the Martin twins. (It bears mentioning here that Gott says the twins are unequivocally the most fanatical competitors on the team. That's twins for you.) It's Abu though that has the most room to blossom. The guess here is that he becomes an All-ACC performer.

9. Minus Trevor Lacey - the onus is on the Martin twins and transfer Terry Henderson to jointly fill his void. Lacey was a shotmaker, but more importantly he was a BIG shot maker. Some guys are born to that role, others have to work their way into it. Outside of Cat and Malik, Henderson should get the first shot to be the guy who gets some of the last shots when it matters.

10. Over at NCCU, despite another serious roster churn, the expectations are another MEAC title. Jay Copeland should be a horse inside provided he stays healthy. The identity of the Eagles will always be rooted in defense, but the other constant in LeVelle Moton's recent great run of teams has been a rock solid point guard. Poobie Chapman and then Nimrod Hilliard were steady and dependable. This year, that role falls to transfer Dajuan Graf. Scoring figures to be balanced, but it's the man at the steering wheel that might ultimately determine NCCU's level of success. If Graf's up to the challenge, expect more big things.
Related topics:
sportscollege basketballnc state wolfpackduke blue devilsnccu basketballunc tar heelsunc basketball
Copyright © 2022 WTVD-TV. All Rights Reserved.
TOP STORIES
Creedmoor rallies around family that lost everything in house fire
Sheriff: Woman stabbed man with Sharpie, pushed him out of car on I-95
Raleigh City Council votes to ban exotic animals
Pullen Park attractions see price rate hike
Worker killed in North Carolina trench collapse
7th victim dies from Highland Park parade mass shooting
Spotted lanternfly sighting confirmed in North Carolina
Show More
Man struck by lightning near island off North Carolina
Is your home prepared for hurricane season?
Wake County continues to scale down COVID-19 testing sites
Fireworks dazzle over Dix Park, downtown Raleigh for Fourth of July
Highland Park 4th of July parade shooting survivors speak out
More TOP STORIES News