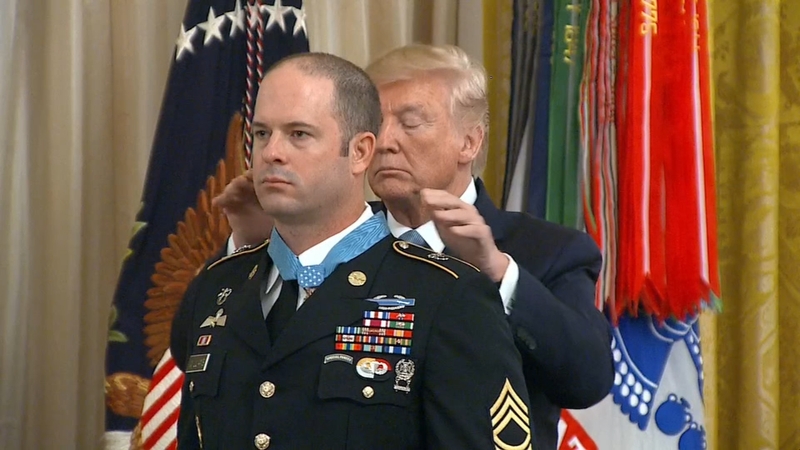 WASHINGTON, D.C. (WTVD) -- An active-duty Green Beret, who is stationed on Fort Bragg, was awarded the Medal of Honor, the nation's highest military honor by President Donald Trump on Wednesday evening.

Army Master Sgt. Matthew Williams played a vital role in the evacuation of his wounded teammates from a mountain as the unit took fire from insurgents in Afghanistan's Shok Valley in 2008.

The Boerne, Texas native's actions helped save the lives of four critically wounded soldiers and prevented the lead element of the assault force from being overrun by the enemy," per the White House.

Williams' team was directed to capture or kill a high-value target of the Hezeb Islami al Gulbadin extremist group in the mountains of Shok Valley on April 6, 2008.

After taking heavy fire, the assault group was pinned down on the mountainside. Williams chose to gather a group of Afghan commandos and lead a counterattack across the valley toward enemy fire.

The Army says Williams helped another team member, Master Sgt. Scott Ford, who was injured by a sniper round, moving him down the mountain to the casualty collection point.

Later, enemy fighters worked to overrun the position but Williams continued a second counterattack, fighting for several hours until helicopters arrived to evacuate the injured.

This honor is an upgrade from the Silver Star he was initially awarded after the battle.

"I was honored to attend the Medal of Honor Ceremony for Master Sgt. Matthew Williams. His heroism during his unit's six-hour battle in Afghanistan against an estimated 200 enemy fighters is the epitome of bravery. Under attack from enemy fighters using machine guns and rocket-propelled grenades, he fearlessly rescued his fellow soldiers while taking on fire for over an hour," Tillis said. "I join our Fort Bragg community and fellow North Carolinians in congratulating Master Sergeant Williams on receiving our nation's highest honor for combat valor for his selfless sacrifice on behalf of the United States."

"I'm incredibly humbled to join President Donald Trump to present Master Sgt. Matthew Williams the highest military award for valor," said Rep. Richard Hudson, R-NC. "There is no greater fighter than an American soldier, and Master Sgt. Williams is among the best of them. The history books will remember, and we will always be grateful for his heroism and courage."