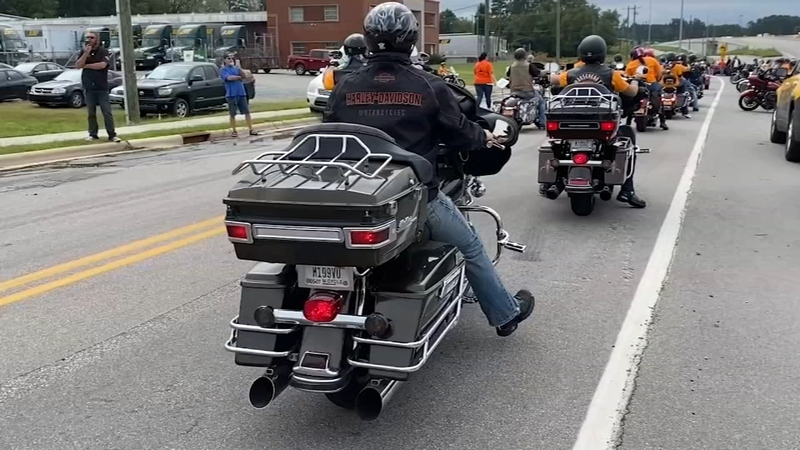 Hundreds of motorcyclists ride in honor of Cannon Hinnant

All those riders participated in a group ride Saturday from the Bull City to Wilson, the home of 5-year-old Cannon Hinnant. He's the little boy shot and killed Aug. 9 while playing outside his home with his sisters.

"I heard about this story and it just hit real close to home," said ride organizer Brook Hogan. "Because I have 4 children of my own. So it was real heavy on my heart that I needed to help, and do something."

The other organizer, former first responder Steven Gregory, agreed: "I've got a 3-year-old and an 11-year-old and they're at home, too. And I didn't know much about it until I saw someone post it on Facebook. And I was like, 'Okay, let's do something!'"

They alerted the motorcycling community on social media and the result, viewed by Cannon's parents, is appreciated.

"Love to see the support," said the boy's father Austin Hinnant," especially from the community."

It's a community that extends beyond North Carolina. Saturday morning ABC11 heard from the organizer of another support caravan traveling from Pennsylvania to our state soon.

"It's amazing, the outcome that all the rides have done for us," said Bonnie Waddell."Yes, absolutely. It's giving back to Wilson, where we're all from, keeping Cannon's name alive and getting justice first before anything, and the girls therapy."

There's $15 donated for each motorcycle. With all those bikes, and more expected in Wilson, that's a lot of money raised to help the family with an assist from, "Everybody that's messaged me on Facebook, we're supposed to have 3 to 4,000 cars, Jeeps, trucks, 3 to 4,000 motorcycles," Waddell said. "It's giving back to Wilson, where we're all from, keeping Cannon's name alive and getting justice first before anything, and the girls therapy."

Darius Sessoms, 25, Cannon's alleged killer, is in jail and on no bond. He is facing a first-degree murder charge.
EMBED More News Videos