Ainsworth was shot multiple times in the line of duty after responding to a report of a suspicious vehicle on Jan. 9.

"It's incredible. It's truly humbling to see just not all the law enforcement officers, but the community to come out," said Rick Armstrong, a Teamsters representative and former Raleigh police officer who helped organize Saturday's fundraiser.

"This is a dangerous profession. We need to continue to support them." - @NC_Governor @RoyCooperNC at tonight's fundraiser at @Honestabesral in support of @raleighpolice Officer Charles Ainsworth. Hear more about the community support on @ABC11_WTVD after the game pic.twitter.com/nNdjeDzk7y

Prior to the event, Armstrong spoke with Ainsworth's family.

"I met with them today, and he's recovering. It's going to be a long and slow process, but he's a fighter. And we have full faith and hope that he's going to be in full recovery," said Armstrong.

Ainsworth is an NC State graduate and has been with the Raleigh Police Department since 2017.

Governor Roy Cooper was among those to to attend Saturday's fundraiser.

"It's clear that our community is showing how much we appreciate his sacrifice, and the sacrifice of all law enforcement officers out there. This is a dangerous profession. We need to continue to support them," Cooper said.

Supporters raised more than $2,000 off ticket sales, which does not include additional donations, raffle tickets, or proceeds from a silent auction.

Four people were arrested in connection with Ainsworth's shooting. Investigators said Cedric Kearney pulled the trigger, but Sherry Richmond, Antonio Fletcher, and Amonie Fletcher were in the area and played a role in crimes that ultimately led up to the shooting.
Report a correction or typo
Related topics:
raleighofficer injuredpolice officer shotfundraiser
Copyright © 2020 WTVD-TV. All Rights Reserved.
More Videos
From CNN Newsource affiliates
TOP STORIES 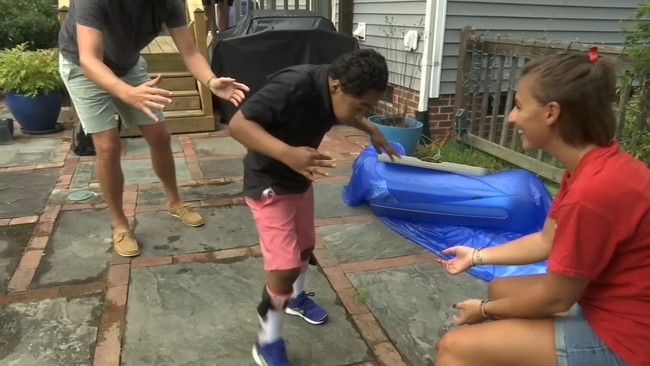