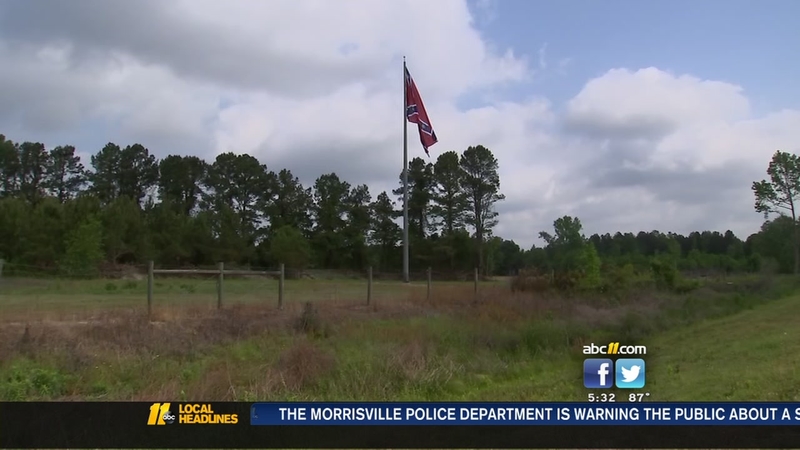 GODWIN, North Carolina (WTVD) -- There's a growing concern about a Confederate battle flag flying along I-95 in Cumberland County. It's located near Wade and Godwin at exit 61.

It's been the talk of the town for two days. The Sons of Confederate Veterans raised the flag on Wednesday as part of a memorial honoring civil war hero Theophilus Hunter Holmes. The group says the flag is on a 90-foot pole and measures 20 feet by 30 feet.

One resident stopped to view the flag after four of his friends called to tell him about it. He was elated and says the flag is a part of his heritage.

"I'm all for it, because I'm from the South. A lot people in North Carolina died on account of this flag," said the resident, who did not want to be identified.

While some see it as a symbol of heritage, others say it's concerning as many groups have used it to promote hate rhetoric.

"If people are using it in a negative way, it does make me uncomfortable especially being a black woman in the South. You want it to stop, you want it to go away," one traveler, who did not want to be identified, told ABC11.

The memorial is on private property and is covered by free speech. Initially, there were reports to officials that it may violate building code; however, Cumberland County Engineering and Planning Department told ABC11 that there's no zoning ordinance that limits the flagpole height.

Still, some county officials say the flag is concerning. They worry that the negative backlash could impact tourism and development.

"This flag will hurt us in more ways than one. Economic development, tourism, and we can't afford to sit by and not address it," said Commissioner Charles Evans.

Evans first visited the site this morning after he was flooded with calls from residents and visitors. He plans to draft a resolution addressed to the Sons of Confederate Veterans politely asking them to take it down.