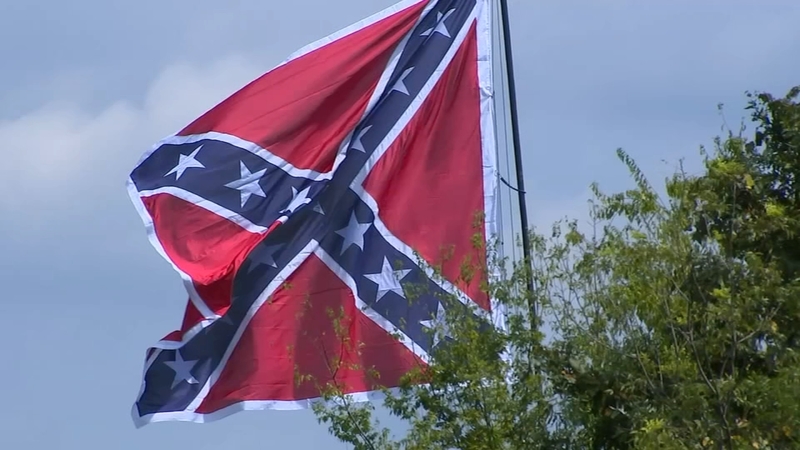 Hall says his Confederate battle flag off Highway 70 in Hillsborough is a symbol of his Southern heritage, not hate.

"I have a right to free speech just as anyone else does," Hall said.

Now, under a new county rule, the 400-square-foot flag is too big at the edge of his property.

The new county guidelines applies to all types of flags, not just the battle flag.

Neighbors can hang flags no larger than 24-square-feet.

For businesses, flags and poles can be taller and wider.

Twelve properties in Orange County had either too many flags flying or they were over the size limit.

Officials say those property owners removed their flags this week to avoid a $500 per day fine.

Hall and his flag are standing firm. He hired an attorney and filed an appeal to save his flag.

ABC11 asked Hall how he felt about the KKK recently using the battle flag in downtown Hillsborough, which some people saw them use as a symbol of hate.

"Well, I would say they need to check their history books. The KKK also had a United States flag down there but do you hear them complaining about the US flag. Just the battle flag," Hall said. "A group will take any kind of flag but that does not represent what the flag means."
Report a correction or typo
Related topics:
societyhillsboroughconfederate flag
Copyright © 2022 WTVD-TV. All Rights Reserved.
TOP STORIES
Court papers show how investigators linked suspect in Hedgepeth murder
As last-ditch effort, Cary tapas bar launches fundraiser to stay open
Supreme Court to hear challenge to race in college admissions
George Floyd's family reacts as civil rights trial begins
Eateries hope for community support during Triangle Restaurant Week
No charges for Johnston County deputy who shot drug suspect in wrist
Mental health providers of color see influx of patients
Show More
LATEST: Next steps in fight against COVID-19
Getting paid on Venmo or Cash App? New tax rule might apply to you
Alex Murdaugh hit with more charges connected to 4 new clients
8,500 troops placed on heightened alert for European deployment
Cruise ship takes passengers to Bahamas to avoid Florida warrant
More TOP STORIES News