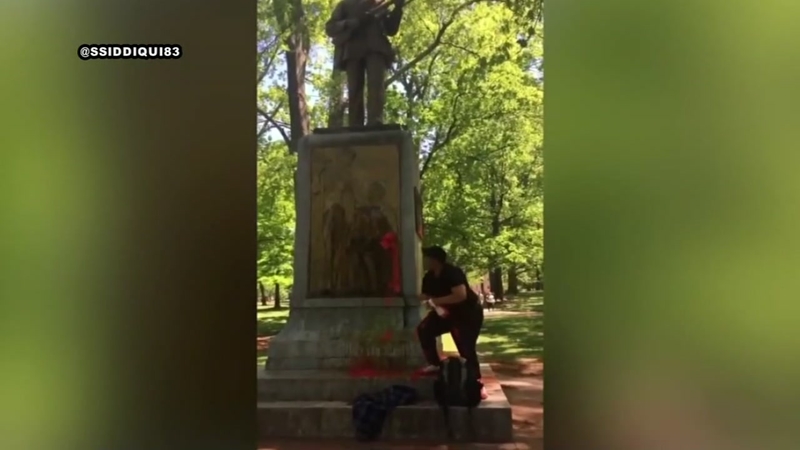 Supporters of Maya Little loudly chanted, "It is our duty to fight for our freedom," as Little was welcomed back to campus following her one-day trial for vandalizing UNC-Chapel Hill's contentious monument to its Confederate dead.

"Obviously, I'm very happy not to have a judgment against me. I don't think I should have had to go to court," Little told ABC11 about the verdict from an Orange County judge.

“It is our duty to fight for our freedom!” — Anti-Silent Sam group and social justice fighters finish rally in Chapel Hill with freedom chant.
Rally comes after UNC doctoral candidate Maya Little was found guilty for defacing #SilentSam statue. No punishment from court. pic.twitter.com/W3mnoD7Coz

The judge found Little, a UNC doctoral candidate, guilty on the misdemeanor charge of defacing a public monument.

But because of her status as a student with little income, the judge did not order her to pay a fine or court costs.

Last April, video of Little's protest was broadcast on Facebook Live as she smeared her own blood and red ink on the Silent Sam statue.

At Monday's trial, she testified in her own defense - telling the judge Silent Sam was built on violence against black people and stood as a monument to the ideals of slave-holding Confederate states.

Orange County prosecutor Billy Masssengale told the court he hoped the statue would not return after demonstrators pulled it down last August.

Massengale said Julian Carr's 1913 Silent Sam dedication speech was one of the most difficult things he's had to hear.

Carr, a wealthy industrialist, philanthropist, UNC alumnus, and Confederate veteran entertained the crowd that day with a story of horse-whipping a black woman on Franklin Street.

"I feel like my family has been on the wrong side of this," said Carr's great great great granddaughter Meg Yarnell, who spoke to us via FaceTime from her home in Northern California.

Last week, Yarnell penned an open letter to UNC administrators that acknowledged Carr as a white supremacist. She also called for criminal charges to be dropped against Maya Little and the other demonstrators arrested during and after Silent Sam's toppling.

"It was important to me to do whatever I could to try to support Maya and the other anti-racist activists," Yarnell said. "(Little is) a leader and I would hope the administration would embrace her."

Little told ABC11 she believes the reason she was able to leave the Orange County Courthouse with no punishment is that so many members of the community rallied behind her, in what she described as a stand against any acceptance of white supremacy.