ReOpen protests can go on but demonstrators must social distance, Gov. Cooper says 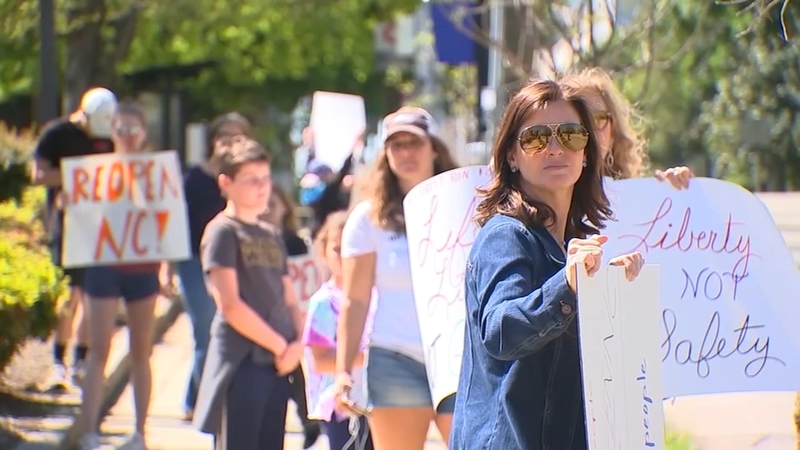 ReOpen protests can go on but demonstrators must social distance, Gov. Cooper says

RALEIGH (WTVD) -- While Facebook has been removing posts announcing anti-quarantine events in other states after consulting with state government officials who said the events would violate stay-at-home orders, the movement is full-steam ahead in North Carolina.

Organizers for ReOpen NC received a letter from Governor Roy Cooper's legal counsel Monday alerting them the protests are not banned; they can go on as planned Tuesday; but demonstrators must follow the rules on social distancing.

“We are very pleased.”
• • •#ReOpenNC response to Governor Cooper’s letter to the group Monday informing them their planned Tuesday protest does not violate his #StayAtHome order, but demonstrators must practice social distancing. #abc11 pic.twitter.com/1b5x2GgAXy

Cooper's letter addresses the group's concerns that Raleigh police were being instructed to shut down the protests for violating the governor's executive order.

Cooper informed the group the protest is allowed. But, he does have the power to enforce social distancing rules for protesters who don't live in the same house.

Biller called it a win for the constitution. "If we can have dozens of people together at Costco waiting for Charmin (toilet paper), we should be able to tolerate people maintaining appropriate social distance and expressing their First Amendment rights," he said.

The protests have won the support of President Donald Trump, even as some demonstrators disobey rules intended to stop the spread of COVID-19.

Monday, Governor Cooper spoke up in a conference call with the nation's governors and Vice-President Mike Pence -- pointing out the White House's own guidelines say a state should not reopen until its seen 14 consecutive days of decline of coronavirus cases.

"One thing that I would ask is that the (Trump) administration do everything it can to let the public know that it is important for us to reach these minimum thresholds before we begin easing restrictions," Cooper said.

In Monday’s conference call with VP Pence, Gov. Cooper pointed out that the White House’s own guidelines say states should wait until 14 consecutive days of COVID case decreases before reopening.
President Trump has encouraged many of the #ReOpen protests. #abc11 pic.twitter.com/80u3vmHnfN

Polls show the overwhelming majority of Americans believe in the restrictions.

Meanwhile, another Facebook group "Stay Home NC" is urging the ReOpen crowd to stand down and stay home.

"You're putting more people at risk by going out to an event like this," said Stay Home organizer Michael Morgan. "We're all going to make it through. But let's do it safely. Wouldn't you rather be alive and have money?"