VIDEO: Couple rescued after being swept out to sea while taking pictures in Hawaii 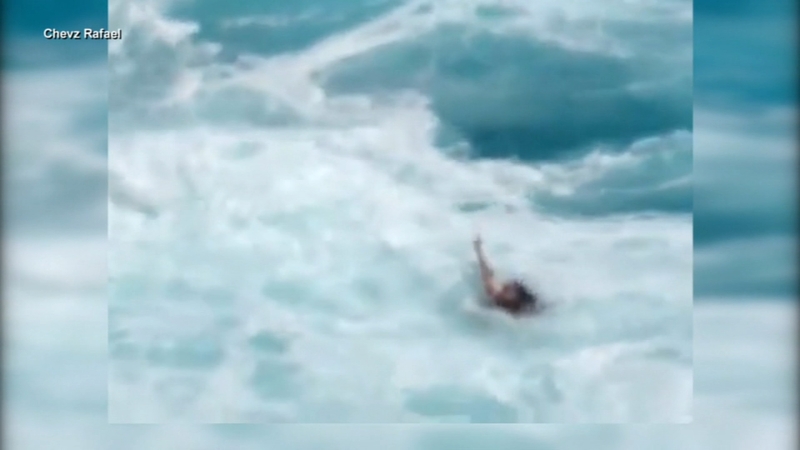 VIDEO: Couple swept out to sea while taking pictures in Hawaii

HONOLULU -- A couple is lucky to be alive after they fell into the water while taking pictures in Hawaii and got trapped in powerful waves.

Cell phone video captured terrifying moments as the couple was swept to sea in the midst of Hawaii's biggest swell of the year off the coast of Oahu.

Witnesses said the couple fell in after they went down a cliff past warning signs to a remote area to try and take some pictures.

The raucous waves separated the couple. The woman can be seen drifting away as waves crash over her head and she fights to stay above water.

"We had a jet ski operator in the ocean already due to the high surf, they responded from around the coast, and met up with the two lifeguards," said Lt. Kawicka Eckart, who oversees lifeguards that conducted the couple's rescue last Sunday. "We put them on our jet ski and brought them in."

For years, state and county officials have expressed frustration with posts on social media that lure tourists and residents to potentially dangerous spots.

Shayne Enright of Honolulu Ocean Safety said he hopes the video will reiterate the critical need for beachgoers to adhere to warning signs.

"Social media paints a picture that all of these locations are fun, safe, do it for the 'gram, get those likes," Enright said. "But we're hoping that this piece of social media can paint a different picture that there are hazards. There are dangers that can happen so quickly."
Report a correction or typo
Related topics:
rescuetouristphotosoceansu.s. & world
Copyright © 2022 ABC News Internet Ventures.
TOP STORIES
2 to 3 inches of snow possible in Triangle
Voting bill collapses, Democrats unable to change filibuster
'We can't get any more': Stores struggle to restock shelves
Third arrest made in Black Friday shooting at Streets at Southpoint
Daniel Turcios shot 5 times after crash on I-440, RPD reports
NC legislature votes to further delay primaries until June 7
'He was special': Durham friends remember Andre Leon Talley
Show More
Cumberland County mom spins way to $500,000 lottery prize
Victim in fatal I-85 crash was just 3 months old
19-year-old military driver charged in wreck that left 2 Marines dead
Earnhardt Jr. to be inducted into NASCAR Hall of Fame
Raleigh man feels lucky to be alive after bullet found above his bed
More TOP STORIES News