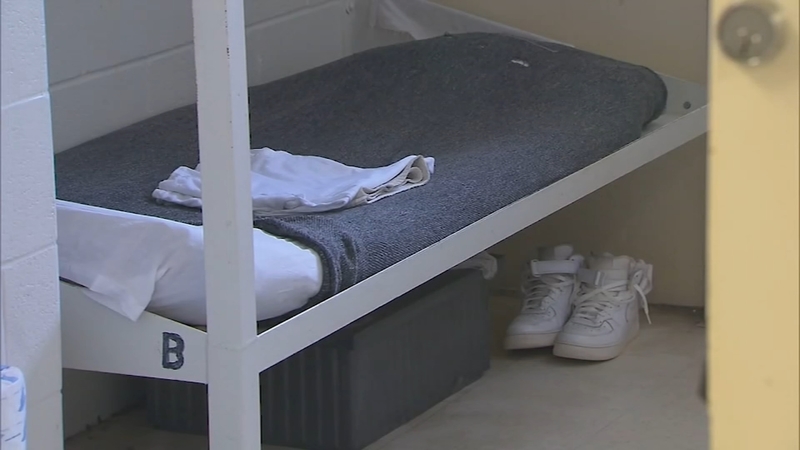 RALEIGH, N.C. (WTVD) -- The North Carolina Department of Public Safety reported 27 active cases across state prisons this week. The number is a significant change from the more than 400 cases found inside Neuse Correctional Institute this time last year.

Though the outbreak in Neuse was the first, it wasn't the last. More than 8,000 offenders tested positive for COVID-19 and 53 died, according to NCDPS.

Lisa's son was one of the offenders who caught the virus while serving time in the Wake Correctional Center. She said this past year was one of the hardest for her and her son.

"It was trying. It seemed like it went by really slowly because at one time I wasn't able to see him. We just struggled through it. He kept his head up and I kept mine up and we just made it through with the help of God," she said.

Lisa and other families were shut out at the beginning of the pandemic, leaving many of them fearful and frustrated.

"I did get frustrated at one point but at the end of the day I knew I had to leave it in God's hands," Lisa said.

Difficulty in physical distancing made prisons in North Carolina and across the country early hotbeds for the virus.

The state said the winter was the hardest with up to 700 staffers out because of COVID-19 and more than 400 active cases at one point. This week just over 100 staff are out and 27 cases are active.

"We're in a very different place than we were a year ago. The fall was very difficult. The pandemic has been extremely tough on our staff, on our offenders and, you know, their families and other stakeholders, it's been very, very difficult," said Todd Ishee, NC Commissioner of Prisons.

Concerns about living conditions and transfers sparked NC civil rights groups to file a lawsuit against the state demanding increased testing and a reduction in the prison population.

The state is set to release 3,500 offenders during the next few months as a result of the settlement from that lawsuit.

"We believe our prisons are safer because of the density strategies that we've put in place, you know issue and reference prisons were not built with social distancing in mind. But we have successfully been able to reduce our prison population by over 6,000 and that's been a game-changer for us," Ishee said.

The state hopes to have vaccinated 55% of offenders and 49% of staffers by next week.

Ishee said that in the past few months, interest in the vaccine has increased.

"Every day we have somebody that says, 'Hey, I changed my mind and I'd like to be vaccinated.' One of the facilities I was at this morning the ward reported 28 new offenders who had previously said no, have changed their mind so you know we continue to feel really optimistic," Ishee said.

Lisa's son is one of the offenders who received the vaccine. For her, restarting family visits made a big difference.

"I was so excited. I couldn't go to sleep the night before because I was so excited to go see him because like I said talking to him on the phone is fine but to actually see him in person, that just warmed my heart," she said.

Despite the improvements in cases and outbreaks, Ishee said the prisons, like the rest of the state, aren't out of the woods yet.