Durham man reunites with crash victim he saved through CPR 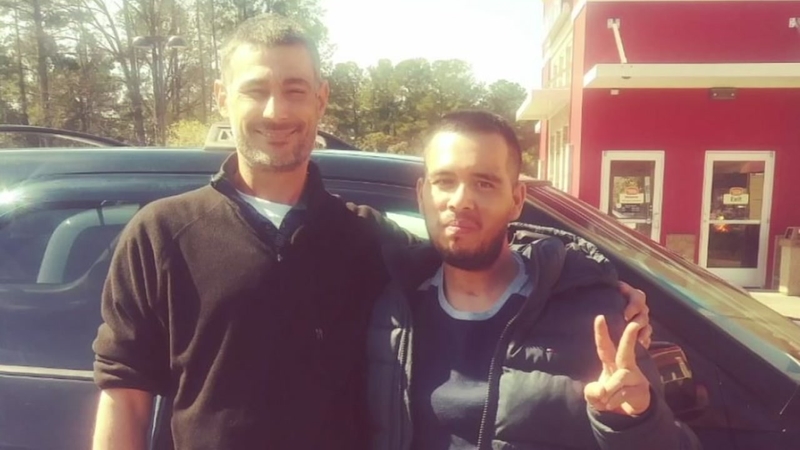 Happy reunion between crash victim, man who came to rescue

DURHAM, N.C. (WTVD) -- A happy reunion took place during the weekend between strangers connected by near tragedy.

Taylor Suggs performed CPR on Angel Mendoza who nearly died in a two-vehicle crash in December.

Their breakfast at Golden Corral on Sunday was their first meeting, three months after the wreck.

"There were tears shed yesterday when we met," Suggs said. "He kept saying thank you. You are my guardian angel. But I'm not. I'm not that person. I'm just someone who knew what to do in a situation like that."

The crash happened Dec. 15 at the intersection of Holloway Street and Alston Avenue in Durham.

Mendoza was heading home from work when his Ford Mustang was involved in a crash with another vehicle.

“There were tears shed when we met.” #Durham man saves crash victims’s life. They reunited for the first time yesterday months after the crash. Angel Mendoza is doing well, talking, walking, and undergoing regular therapy as part of his recovery. Breakfast reunion @goldencorral pic.twitter.com/k2BAvQyK5X

Suggs was on a nearby bus and witnessed the crash.

He rushed over to help.

"I checked his pulse, his eyes were dead to the world. That's when I started CPR," Suggs told ABC11.

Suggs said he performed CPR for 15 minutes until paramedics arrived and determined that Mendoza, a married father of two, was clinging to life.

"God ain't through with him yet." Suggs said. "He's got to relearn everything. He received extensive brain damage, but he's doing great. He is able to talk. You can tell he searches for things. But he's doing fantastic and it was so good to see him."

Mendoza has been out of the hospital for a week. Mendoza was not available to chat with ABC11 but his wife said that he's undergoing physical therapy at home.

Suggs hopes his story encourages others to learn CPR.

"It's important because you'll never know when you're going to come across something like I come across -- an accident where someone needs help," he said.

There are many ways you can learn CPR.

There are videos on YouTube by the American Heart Association.

If you live in Wake County, EMS offers classes on the second Monday of each month.

Durham EMS is developing a bystander CPR program. Residents who are interested can call (919) 560-8285.