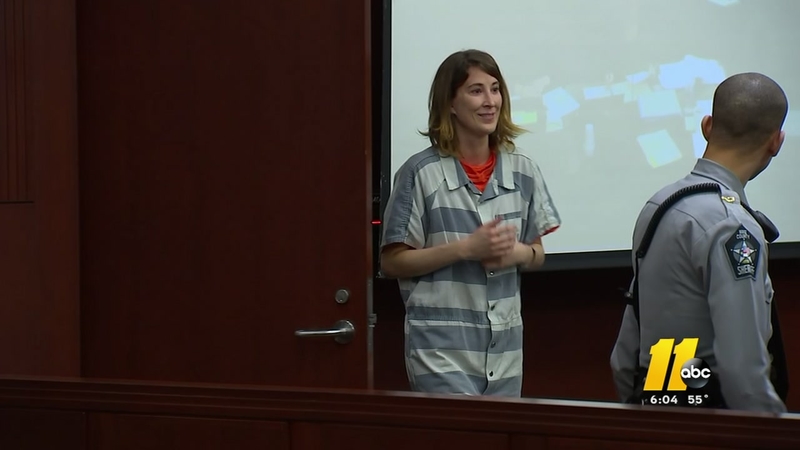 RALEIGH, NC (WTVD) -- New details emerged Friday about a couple who lost custody of their children in a child-abuse case.

ABC11 has now learned the mother is accused of trying to convince a woman in Florida to kidnap her teenage daughter from a foster home and help hide her until the child turned 18.

When Lindsey Smith was charged in June with child abuse, she was able to post bond and get out of jail.

Warrants had accused Smith and her husband of causing serious mental injury to their now 12-year-old daughter.

The couple was accused of exposing the child to years of extreme isolation, ostracism, long periods of prolonged discipline and failing to provide an adequate education.

But when she came to court on the new charges Friday afternoon, she found out that won't happen this time because she has no bond.

As soon as she walked into district court, Smith was told she would likely spend the holidays behind bars.

"What has happened is we've had a Superior Court judge set your bond. I don't know if you knew this part," Judge Craig Croom of /Wake County District Court said to Smith's attorney.

"I did not know that," the attorney replied.

"The conditions set by Judge Shirley; no bond on this case," Croom said.

She and her husband, Russ Smith, were charged in June with negligent child abuse causing serious injury.

RELATED: Grandma on Raleigh couple accused of child abuse: 'They are criminals'

The two live in a nearly 7,500-square-foot house in Raleigh's Northridge.

At the time, they had a blended family of five children, but the children went to foster care.

"It's frightening. It is mind-boggling said Tammy McKinney, Lindsey Smith's mother. "I can't believe my daughter has come to this."

ABC11 spoke to McKinney from her home in Texas on Friday.

She was caught off guard by the latest allegations that Smith tried to get a woman in Florida to come to Raleigh and abduct Smith's 17-year-old daughter from foster care.

According to court documents, Smith's plan was to hide the girl in Florida from Child Protective Services until the child turned 18.

McKinney said the woman in Florida is the mother of her 17-year-old granddaughter's best friend.

"She really thought that this woman would do that," McKinney said. "My daughter thinks that she is above the law. She's completely narcissistic."

McKinney said she was happy that her daughter has no bond.

"Someone needs to deal with her and keep her confined," McKinney said. "I know that she has made children feel terribly guilty that they were arrested and in jail."