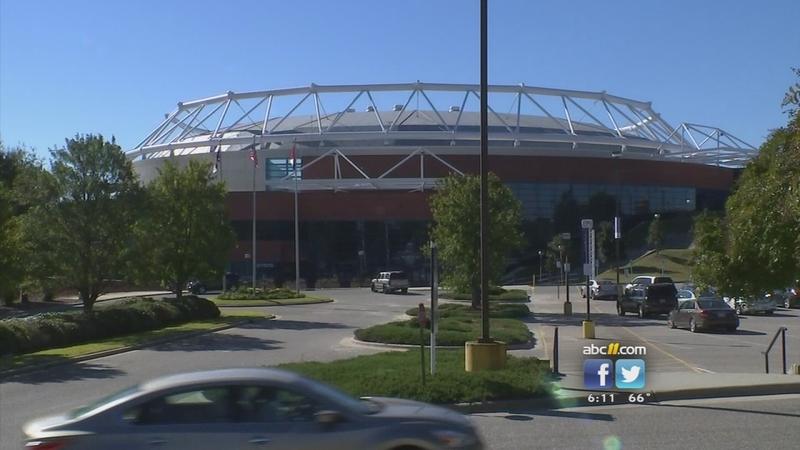 FAYETTEVILLE, N.C. (WTVD) -- The road to stardom seems to lead through the Crown Complex, and when you're talking the Miranda Lamberts, the Tyler Perrys, the J.Coles and Elton Johns of the world in the All-America City, yes, people are caught off guard and they're excited.

"Most of my life-they (big acts) just don't come here," said Fayetteville native Michael Downing, who saw Elton John's Fayetteville show in March. "They just go to Raleigh. They just go to Charlotte. It cost so much to do these shows, it beat them having to set it up two times."

"Once upon a time the claim to fame for Fayetteville was we're close to Raleigh," added Fayetteville resident Ron Davis. "You have Myrtle Beach-blah, blah, blah, but when you have something in your back yard? Hey-that's good."

The Crown Complex's recent turnaround hasn't gone unnoticed by the region, and much of the attention is focused on big-name artists who have made their way to town since new management took over.

"Our first thing was to dispel all the myths that nothing comes to Fayetteville," said Thaddeus "T.J." Jenkins, chairman of the citizen-driven Civic Center Commission.

In August, Fayetteville native J. Cole brought the city national attention with his Forest Hills Drive Tour, capping the show with an appearance by rappers Drake and Jay-Z. While management credits the concert's crowds to Cole's desire to put his hometown on the map, they've also been able to pull in big names on their own. On Friday, comedian Katt Williams will perform. This week, the Crown announced country star Jason Aldean will play the complex in February.

Some of the many big acts recently at Fayetteville's Crown Complex.

Those behind the turnaround say Spectra Venue management connections play a key role in this.

"Now that we're operating the building in Fayetteville, Fayetteville is no longer standing on its own," said General Manager Jim Grafstrom.

Prior to Spectra taking over in 2013, the county-owned venue struggled to attract good shows and profit. At the time Grafstrom says the venue was operating on a roughly $4 million budget loss. That loss was cut in half during the last fiscal year.

Spectra, which operates 125 venues across the country, is able to draw artists in by offering them back-to-back plays at some of their other 125 venues in the United States.

Grafstrom says that's how they landed Elton John and Miranda Lambert, who were routed to the Augusta, GA. venue during the week of their Fayetteville performances.

In comes the recent opening of the ESPN Upper Deck, a specialty restaurant and bar inside the complex that is open to the public for lunch on Thursdays and Friday.

The products come from locally-owned Kinlaw's meat market, and between the restaurant and Crown catering services, the traffic is non-stop.

"We could be feeding 50 people to 500 to a couple thousand people," said Dahlstrom.

Grafstrom also said they respond immediately to ticket holder complaints. He recalls a man leading him to his seat during the Disney on Ice performance. The seat had screws sticking out of it, and raggedy upholstery.

"(He said) It literally looked like somebody let a pack of wolves in my seats," Grafstrom recalled. "(I said) You know what? You're right, and the next time you come here, we're going to fix it."

That's exactly what they did.

"You've gotta stay on top of the things that are important to your patrons," Grafstrom said.

THE FUTURE OF THE CROWN

Jenkins said the commission is challenging Grafstrom's team to outdo the acts they've managed to attract in 2015.

"It's hard to up a sold-out J.Cole show when JayZ and Drake show up," he laughed. "But we want the best shows in Fayetteville. We don't want to give away our tax base to Raleigh. We want that to support Fayetteville's tax base."

The traffic would increase the tax base, and so would the potential for development in the area.

In other words, any commercial development would have to meet attractive tourism standards, and so would renovations to existing businesses. If any of those businesses decide to tear down and rebuild at least 40 percent of their building, they'd have to adhere to the same quality standards.

The ordinance also put billboard restrictions on the corridors surrounding the complex.

Most of the businesses surrounding the Crown are older motels, but the zoning ordinance leaves open the possibility for hotels and restaurants to move into the 301 corridor, something many residents say they'd love to see.

The Fayetteville native is skeptical and optimistic at the same time.

"Depends on the politics of this town," Downing added. "What they allow. What they don't. How bad they want it. How fast they allow it."