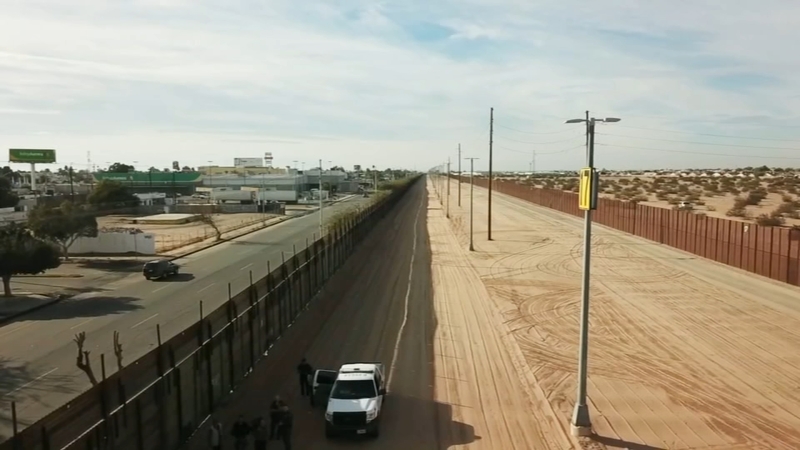 Before they arrived, some of the lawmakers, including Rep. Alexandria Ocasio-Cortez, were mocked with obscene memes on a private Facebook group purportedly populated by current and former Customs and Border Protection agents. Officials said they were investigating.

Rep. Joaquin Castro, the chairman of the Congressional Hispanic Caucus, said the tour showed him "that the system is still broken."

"When we went into the cell, it was clear that the water was not running," Castro, D-Texas, said, speaking at a news conference while protesters heckled the delegation. "There was a toilet but no running water. One woman said she was told by an agent to drink water out of toilet."

Ocasio-Cortez said "the idea that we have to choose between people" is "a false notion."

Castro called the Facebook page "disgusting and vile," adding his belief that many in CBP "have become desensitized to the point of being dangerous to the migrants in their care."

Recent activity within the secret group, first reported by ProPublica on Monday morning, includes several posts aimed at Democratic lawmakers ahead of their visit Monday to El Paso and Clint, Texas to tour CBP's detention facilities.

"Today, U.S. Customs and Border Protection was made aware of disturbing social media activity hosted on a private Facebook group that may include a number of CBP employees," CBP's Matthew Klein, Assistant Commissioner, Office of Professional Responsibility noted in a statement. "CBP immediately informed the DHS Office of the Inspector General and initiated an investigation."

Klein added that CBP employees are expected to adhere to the agency's standards of conduct, "both on and off duty," directing that its ranks "not make abusive, derisive, profane, or harassing statements or gestures, or engage in any other conduct evidencing hatred or invidious prejudice to or about one person or group on account of race, color, religion, national origin, sex, sexual orientation, age or disability."

U.S. Border Patrol Chief Carla Provost called the posts "completely inappropriate" and argued the posts are "contrary to the honor and integrity I see -- and expect -- from our agents day in and day out."

"Any employees found to have violated our standards of conduct will be held accountable," Provost stated.

Protesters vocally challenged the lawmakers throughout their news conference, shouting "liar, liar" and "do your job," and calling reports of the private CBP Facebook group "B.S."

"You can yell and scream," Rep. Rashida Tlaib, D-Mich., responded to amplified protests. "What we did today was bring the eyes and ears that you can't have when we go to these facilities."

Ocasio-Cortez, who was the subject of numerous posts and is participating in the congressional delegation Monday, tweeted, "How on earth can CBP's culture be trusted to care for refugees humanely."

Rep. Bennie Thompson, the chairman of the House Committee on Homeland Security, called for anyone who posted the lewd content to be fired, and asserted that the officials responsible "seem empowered by President Trump."

"This Facebook group is beyond sexist and racist - it is truly abhorrent and shameful, and there is no excuse for this depraved behavior. The agents found to be responsible for these vile comments should no longer have the privilege of representing the United States of America in uniform," Thompson, D-Miss., said. "It is clear these federal law enforcement officials seem empowered by President Trump and seem all too willing to take his anti-immigrant rhetoric to the next level when they think no one is watching. It is also clear that DHS, CBP, and the Border Patrol have serious and systemic problems that must be addressed immediately. The chaos within DHS needs to end and proper leadership needs to be put in place."

Members of the Congressional Hispanic Caucus, House Judiciary Committee and other Democrats were in El Paso and Clint, Texas, to investigate several facilities used to detain immigrants, following reports of horrid conditions and mistreatment of immigrants there.

After Congress passed a $4.6 billion package last Thursday to send humanitarian relief to the border, lawmakers say they want to see how the facilities are currently operating, observe the treatment of immigrants in the facility, and learn about the enforcement of the Trump administration's anti-immigrant policies.