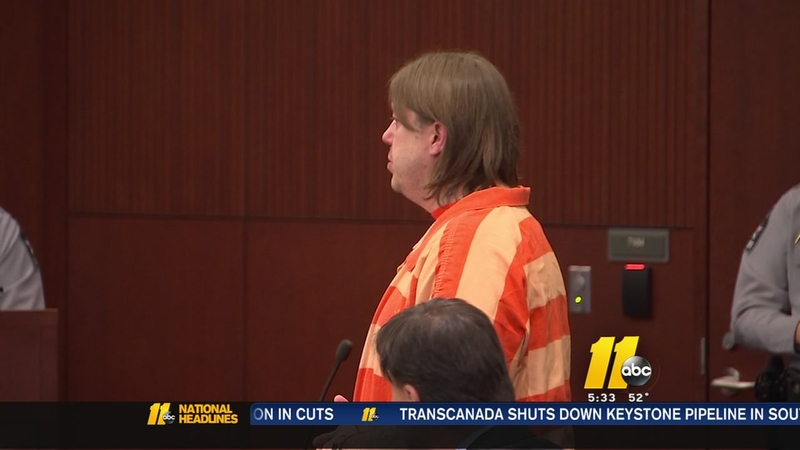 RALEIGH, North Carolina (WTVD) -- A 35-year-old man who ran into a group of cyclists in Cary more than a year ago appeared in a Wake County courtroom Friday to enter a guilty plea in the case.

Police said on October 17, 2016 around 6:30 p.m., a group of four cyclists were riding down High House Road towards the intersection with NW Maynard Road near Bond Park when an SUV headed in the same direction ran over two of them.

In a 911 call, a caller reported: "Someone drove by in a car and hit them and drove off."

"They're both lying on the ground," the man continued.

A second caller told a 911 operator that he lived in a neighborhood nearby and a man had just driven into his cul-de-sac with a bicycle stuck in his windshield.

Virginia Davis, of Cary, and Laura "Lori" Cove, of Raleigh were taken to the hospital with serious injuries. The other two cyclists were not hurt.

In court Friday, a prosecutor said Davis has been through seven surgeries and is still recovering.

Virginia Davis was struck when cycling. She’s on her 7th surgery and is here for Christopher Moore’s court appearance. #ABC11 pic.twitter.com/Gi4CNzxhZm

Cove, who worked for the Town of Cary in the Transportation and Facilities Department, suffered a serious brain injury and remains in long-term care in a semi-conscious state.

Cove's coworker, Cary Director of Public Works Scott Hecht, spoke of what a wonderful person she is and asked the judge for the maximum sentence.

"You left them to die like they were a possum or a deer," he told Moore.

In court Friday, Moore's attorney said he suffers from emotional issues and is getting treatment in jail.

At sentencing, Superior Court Judge Graham Shirley detailed Moore's 18-year pattern of criminal conduct and listed all the ways he tried to cover up his involvement in the crash, including removing one of the bicycles from his windshield, taking the vehicle to a car wash, and trying to blame it on the previous owner of the car.

He also blasted Moore for leaving the women like animals on the side of the road before sentencing him to 15-19 years in a state prison.

ABC11 has decided to slowly reduce the number of stories on the website that have a comments section. We believe very strongly that our audience should have an opportunity to discuss and debate events in our world, however, we have not been able to moderate the comments as well as we would like. Instead of hosting a platform that could allow a few loud and ugly voices to dominate a conversation, we want to encourage everyone to join us on our social media platforms and speak out there. Facebook: facebook.com/ABC11 Twitter: twitter.com/ABC11_WTVD
Report a correction or typo
Related topics:
carywake countycyclinghit and runwake county newscrash
Copyright © 2022 WTVD-TV. All Rights Reserved.
RELATED
Bike signs cause concern for some Cary residents
Prosecutor: Cyclist hit in Cary on life support
Man charged with hitting cyclists in Cary
TOP STORIES
Cary store owner says thieves stole 300 gallons of gas
Mother, son found dead outside Hope Mills apartments
Wake Forest Montford Point Marine celebrates 100th birthday
Wake County reports highest rate of COVID-19 cases per capita in NC
With primaries finished, candidates turn focus to November
Motorcyclist killed in two-vehicle crash in Fayetteville
Biden invokes Defense Production Act for formula shortage
Show More
NC woman wins $2M on lottery scratch-off on Friday the 13th
Gas prices continue to hit new highs in NC
Target's stock plunges amid disappointing first quarter results
Wake Co. Board of Education approves meal price increase for 2022-23
1st monkeypox case in US this year reported in Massachusetts
More TOP STORIES News