Shocking double elimination on 'Dancing with the Stars' rocks the ballroom 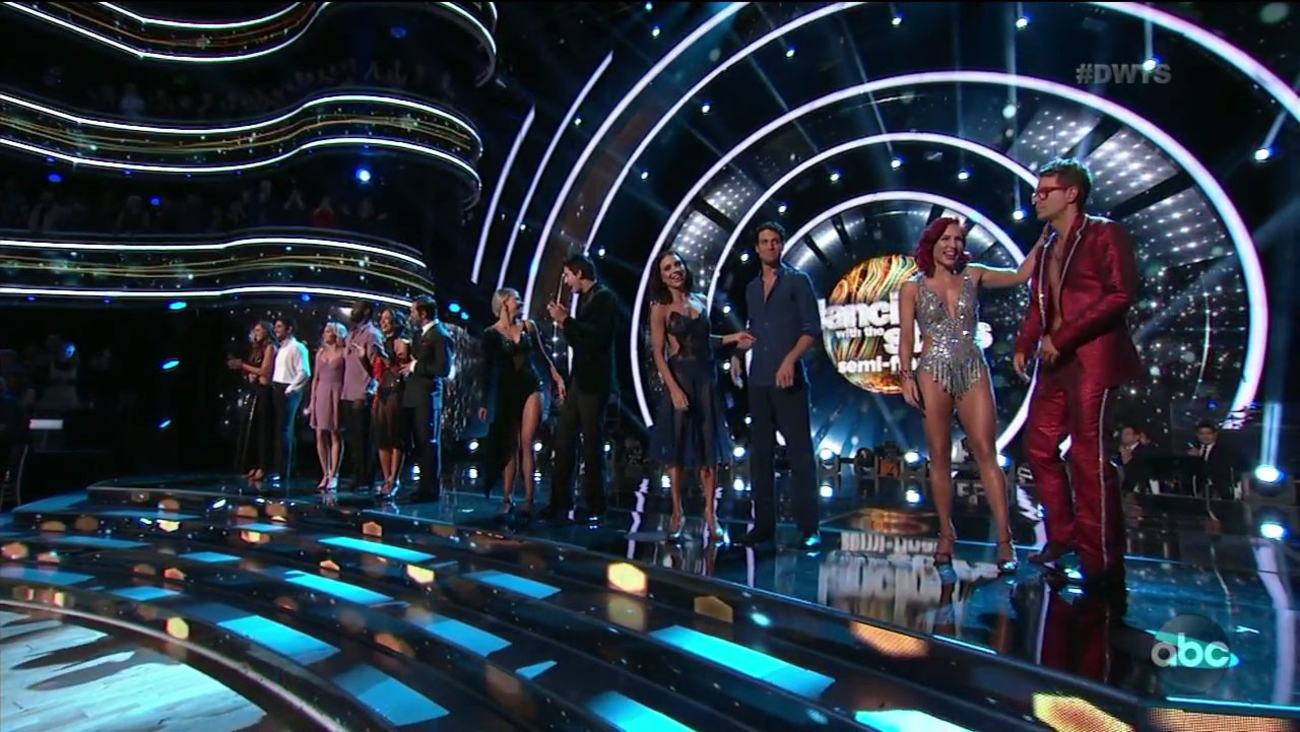 The remaining celebrities and their professional dancing partners stand on stage as they wait to perform.

LOS ANGELES -- The semifinal round of "Dancing with the Stars" showed us two packed hours of performances. Each of the remaining six couples took to the dance floor twice.

One dance was dedicated to a meaningful person in their lives, and the second dance was a "judges' choice," which included an in-person visit from one of the judges during rehearsal.

In the end, we saw another double elimination.

Here's a rundown of the semifinal scores, from highest to lowest:

Juan Pablo Di Pace- 30 out of 30
Juan Pablo earned another perfect score for the third consecutive week for his first dance, and the judges were all blown away by his Argentine Tango.

Juan Pablo dedicated the routine to his mother, who has spent the past year battling breast cancer. Her warrior spirit inspired him, and he was proud to say she beat the disease.

Mom and dad are front and center in the audience tonight, and he did not let them down. Cheryl choreographed a tough dance, filled with content.

Bruno Tonioli said it had the pure essence of an authentic Argentine Tango. Carrie Ann Inaba said J.P. is in a class by himself. Head judge Len Goodman gave them a standing ovation and said it was a dance he will always remember.

Juan Pablo's second dance- 30 out of 30; grand total 60 out of 60
Mentor Bruno asked Juan Pablo to revisit the Salsa from week one. While it was deemed good for a first round, Bruno knew that after all these weeks of learning from Cheryl, Juan Pablo could nail the dance, and he did.

Evanna Lynch- 30 out of 30
Irish director Simon Fitzmaurice gave young Evanna one of her first big film roles. Sadly, he died after a long battle with A.L.S.

She dedicated her contemporary dance to Simon and his fighting spirit.

Len loved the powerful, polished performance. Bruno thought the storytelling was heartfelt and flawless, and Carrie Ann told Evanna she did her friend's memory justice, and the dance was fierce, loud and proud.

Evanna's second dance- 28 out of 30; grand total 58 out of 60
Len gave the couple a 5 during week one for their Foxtrot and it stung. They were happy for the chance to do the dance again, with eight weeks of training behind them. Len was the mentor and told Evanna to work on her frame, footwork and body contact. Check, check, check!

Alexis Ren- 28 out of 30
Alexis decided to dedicate her first dance to her pro dance partner, Alan, and their blooming relationship.

She said it's the faith he has in her that has gotten her this far. They perform an elegant Waltz that Bruno thought was perfect. Carrie Ann saw a minor lift so she deducted a point; Len scolded Alan for not having enough Waltz content in the routine.

Alexis's second dance- 30 out of 30; grand total 58 out of 60
It was the Jive as the re-do for Alexis. She did a routine for week one but mentor Bruno was sure she could do better. The first week she was "fuzzy." He wanted her to hit it hard. Alan choreographed a fun Jane Fonda-esque aerobic themed number and the judges loved it.

Milo Manheim- 27 out of 30
Milo and Witney were in the unenviable position of having to follow Juan Pablo and Cheryl's perfect Argentine Tango. He brought a lot of emotion to the dance because he was dedicating it to his mom, actress Camryn Manheim.

They've got a tight bond and Milo shared he doesn't always let her know how much she means to him. They got three 9's and the judges all had good, positive reinforcement.

Milo's second dance- 28 out of 30; grand total 55 out of 60
Carrie Ann wanted to see how much better Milo can do a Cha Cha after performing it in week one. She felt he was a little out of control and knows he can handle the dance better now.

After the performance, she said she did see more confidence, but felt he was still a little wild.

Joe Amabile- 22 out of 30
Joe was assigned a contemporary routine and he dedicated it to the women in his life: mom, grandma, and girlfriend Kendall.

Jenna choreographed a pretty sultry dance, so Joe decided it was really for Kendall.

Carrie Ann was impressed with his fluidity and saw a new dancer. Len and Bruno disagreed. They both felt Jenna did all the work and Joe was a strong frame she could dance around.

Joe's second dance- 24 out of 30; grand total 46 out of 60
The quickstep Joe did in the first round was pretty much a train wreck. Carrie Ann was the coach for this do-over and her primary tip to him was to breathe.

What a difference a few weeks makes. This was Joe and Jenna's highest score of the season.

Bobby Bones- 21 out of 30
Bobby's dedication dance was a love letter to his "people." He doesn't like to call them fans; they are his friends.

And their voting is what's gotten him this far in the competition. The dance was a Salsa to a Flo Rida song and it was pure fun.

Len said the dance wasn't exactly conventional, but entertaining nonetheless. Bruno agreed that it wasn't really a Salsa, but it was a great show. Carrie Ann praised how far he's come but did point out a few mistakes.

Bobby's second dance- 24 out of 30; grand total 45 out of 60
Len visited Bobby and Sharna's rehearsal and was determined to get him to do a few proper steps for the Jive. It was the dance he did in week one and as Len said, it was out of control. The judges all love Bobby's entertainment value and he earned three 8's.

SPOILER ALERT
Three couples were told they were in jeopardy and two were being eliminated. In jeopardy: Joe and Jenna, Alexis and Alan, and Juan Pablo and Cheryl.

This week was a reminder that this isn't a competition to see who the best dancer is. It's who the most popular dancer is. Even after all his perfect scores, Juan Pablo was sent home. Joe was also sent home.