'Dancing with the Stars' sees 1st elimination of the season 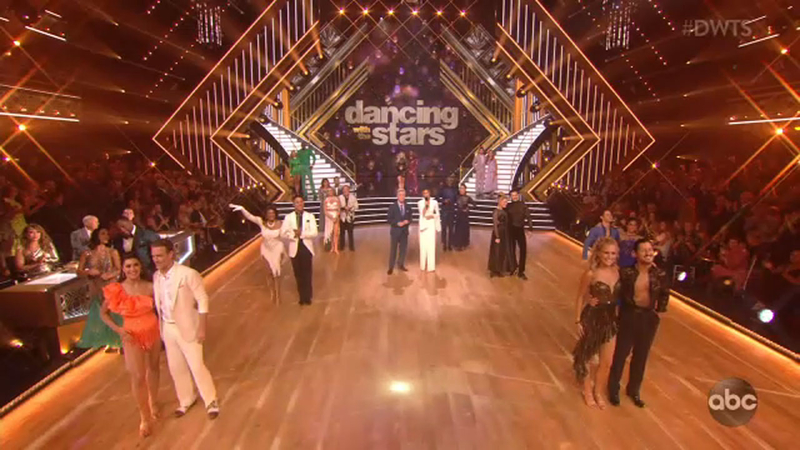 'Dancing with the Stars' sees 1st elimination of the season

LOS ANGELES -- "Dancing with the Stars" returned for its second week, and we saw the 12 celebrity and pro-dancer couples competing to avoid the first elimination of the season.

Judges scores from Week 2 were combined with their scores from Week 1. Plus, we saw the first, live-viewing audience vote of the season. Host Tom Bergeron also revealed another change: if they want, the judges will be able to save one of the bottom two couples.

Here's a recap of Round 2, from highest score to lowest.

The most recent "Bachelorette" was clearly more comfortable in the ballroom than the Bachelor nation mansion. Two weeks in and she seemed completely relaxed. Hannah shared some pictures from her childhood, when she took ballet class like a lot of toddlers. She said when it quit being fun, she quit dancing. Her time so far with Alan has been a joy, and Hannah said it's been a long time since she did something totally for her. Head judge Len Goodman loved her musicality and called her Viennese waltz the best dance of the night. Carrie Ann Inaba felt whisked away, and thought Hannah told her a story through her dance. Bruno Tonioli said he was transported into a romantic dream.

Last week's leader stayed strong. This time, Emma taught James a proper Cha. He revealed he actually had to learn a Cha once for a sitcom role. Well, 20 seconds of a Cha! Emma told him the full dance would be very different from the fake TV version. They performed to Lionel Richie's classic "Dancing on the Ceiling", and the routine ended with a barrage of balloon mayhem. Len called it another solid performance with crisp footwork, but a few too many gimmicks for his liking. Bruno and Carrie Ann both caught a misstep but liked the showy, clean routine.

We saw the first paso doble of the season, with Lauren and Gleb's song choice being Demi Lovato's "Confident." Lauren admits she's trying to be more confident, but it's always been a struggle. She looks back to her 10-year-old self as a reminder that it's OK to dream big. In a big "paso" move, Gleb pulled off her skirt; Lauren laughed that her dad in Alabama would be very surprised watching this portion of the dance. Carrie Ann said she loved seeing Lauren come out of her shell, and her critique was to be more consistent. Len and Bruno both praised her power and strength.

The young model, who is stepping in for her injured supermodel mom Christie, said last week was a complete whirlwind. She's focused now, having a full week to learn from Val. They are assigned a rumba, the Latin dance of love. Sailor feels awkward being so intimate with someone she's barely just met. When they finished the routine she asked Tom if her mom was crying... or cringing. (Mom was pleased!) Bruno thinks she has everything going her way and although she has all the right moves, Sailor needs a little stronger intention. He advised her to do the steps Val teaches her, but to also give back and fully play the part.

The pop star reveals this isn't the first time she's been judged for her dancing. She was harshly criticized by "Fifth Harmony" fans who knocked her for being the worst dancer in the group. Ally sees this as an opportunity to take the lead and get ahead of these bad feelings and prove she can dance. Len thought the dance was pretty, but still needed work technically. Bruno and Carrie Ann were kinder, with Bruno telling Ally she can dance. Period. Carrie Ann got out of her chair to give the pop singer a big hug and remind her that dance can be transformative.

Karamo has a secret weapon. His mother-in-law to be, Carol, is a former ballroom dancer! She comes to rehearsal and offers her comments on how to get Len on Karamo's side. He and Jenna do a quickstep to Prince's "Let's Go Crazy" and Bruno said the dance made him crazy for Karamo. Carrie Ann also praised the dance as electrifying. Len was the wet blanket who thought there was too much flying around.

Kate and Pasha performed the foxtrot and this seemed to be the dance tailor made for the actress. Add to that: their song was Frank Sinatra's classic, "Fly Me to the Moon." Carrie Ann thought the routine was amazing and noticeably different from Week 1. Len called it a wonderful job.

It was an emotional week for Kel, as he juggled learning the samba with dealing with a dad having brain surgery. Luckily, dad's doing OK. And it helped charge Kel to want to knock this dance out of the park for dear old dad. Len thought the routine had plenty of rhythm with plenty of recognizable steps; Bruno praised Kel's naturalness and Carrie Ann said while he was very smooth, a few times his bounces became inappropriate thrusts.

Mary and Brandon danced a Cha to Aretha Franklin's classic, "Think." Of course, this highlighted the generation gap between these partners. He hasn't heard of the song. She says he reminds her of her grandchildren. Enough said. All three judges are smitten with Mary's performance abilities and charm, with Carrie Ann confessing that it distracts from the mistakes.

Ray and Cheryl get the foxtrot and she knew she had to pull out every one of her teacher tricks to pull it off. One thing in their favor: they dance to Earth Wind and Fire's "September." All three judges praised Ray's smile and personality, but they also knocked his technique. He keeps his head held high and said it's a journey that's about progress, and it's not where you start, it's where you finish.

Sean shows his lighter side by having fun with a real "campaign" to promote "Spider/Arnold," complete with bumper stickers, signs and a bullhorn throughout Hollywood. Lindsay got him focused during rehearsal, and they performed a tango to Walk the Moon's "Shut Up and Dance." Len said it was better than last week. For him, that seems like high praise. Bruno said the routine actually looked like a tango and Carrie Ann called it sure-footed. Both Bruno and Carrie Ann saw much improvement.

The former NBA star admits it has been tough to be last on the scoreboard. Peta gently asked him about his troubles remembering the steps. He said he has memory loss; that meant Peta needed lots and lots of repetition. Their salsa was much improved from Week 1, with Bruno telling Lamar he was more relaxed and it's a (small) step in the right direction. Len complimented Peta for the job she's doing teaching such a very tall man how to dance.