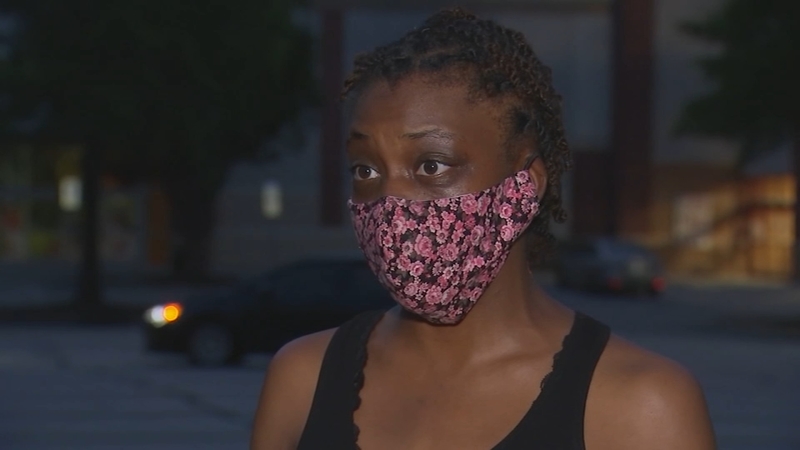 Man charged, accused of pointing a gun at Black mother in Raleigh

RALEIGH, N.C. (WTVD) -- Criminal charges were filed in Wake County District Court in the case of a Raleigh mother who says she had a gun pulled on her by two men wearing "MAGA" hats.

"He pointed (the gun) at me and my 15-year-old daughter that was in the passenger side seat," Zariel Balogun described back in July when ABC 11 first reported the scary allegations.

Balogun said she and her 15-year-old daughter were racially harassed at gunpoint while leaving the BJ's Wholesale Club off Capital Boulevard in northeast Raleigh. She alleged two white men, wearing Make America Great Again caps shouted racial slurs; one of the men allegedly pointed at gun at Balogun's car.

"I told him to put his gun away because he wasn't going to shoot anyone. When I said that, it kind of made him mad. He started saying, 'oh they're not scared of guns. They're ghetto, Black b****s. He immediately turned his hat around and said 'this is exactly why we need to make America great again because of these ghetto Black b****s'"
EMBED More News Videos

Wake District Attorney, Lorrin Freeman has charged Daniel Wilkinson with two counts of misdemeanor assault with a deadly weapon. There was no mugshot on record, as Wilkinson was not arrested; he was served with an order to appear in court. If convicted he faces up to 60 days in jail on each count.

"We're happy. We're pleased that this was charged," said Balogun's attorney, Dawn Blagrove. "What we're not happy about, however, is the fact that District Attorney Freeman, does not believe that this crime was racially-motivated."

The MAGA hat-wearing gunman who Zariel Balogun accused of pointing his weapon at her and her daughter while shouting racial slurs has been charged with assault by the Wake DA. Tonight, Balogun’s lawyer questions why no charges for ethnic intimidation? #abc11 pic.twitter.com/pHQw9UeBgS

We took that concern to Freeman tonight. Why wasn't Wilkinson charged with the more serious offense of ethnic intimidation?

Freeman told ABC11 over the phone, "We do not anticipate additional charges... After a thorough investigation reviewing the circumstances under which the victim and defendant were interviewed, we did not find evidence to support (the crime) was initiated based on ethnicity."

Blagrove responded, "I think it speaks directly to the failure on the part of our elected officials to really take seriously and protect the lives of Black people. (Racial intimidation) is a real threat. These crimes are on the rise."

Raleigh Police were able to identify Wilkinson based on the info from the victim. He turned himself in and is due in court to be arraigned on the assault charges Sept. 14.
Report a correction or typo
Related topics:
raleighracial profilingrace relationshate crimeracism
Copyright © 2022 WTVD-TV. All Rights Reserved.
RACISM
Emmett Till, his mother to be awarded Congressional Gold Medal
'Women of the Movement' looks back at Emmett Till murder
Arbery case: Black men feel under suspicion for being Black
Gold medalist Suni Lee says she was pepper-sprayed in racist attack
TOP STORIES
Snow fall begins in some parts of central North Carolina
NC prepared as winter storm brings rain, snow and sleet
Schools in Wake, Durham counties to close Friday
Contact tracers' role changes as pandemic reaches new heights
Flavor District, Triangle's largest 'ghost kitchen' to open in fall
Residents in Wilson prepare for black ice and snow
LATEST: Many testing sites closed Friday because of winter storm
Show More
Reporter hit by car on live television, but continued reporting
Check your tires before -- and after -- the wintry weather
American Airlines flight diverted over maskless passenger
'We can't get any more': Stores struggle to restock shelves
Essentials to keep in your car during winter storms
More TOP STORIES News