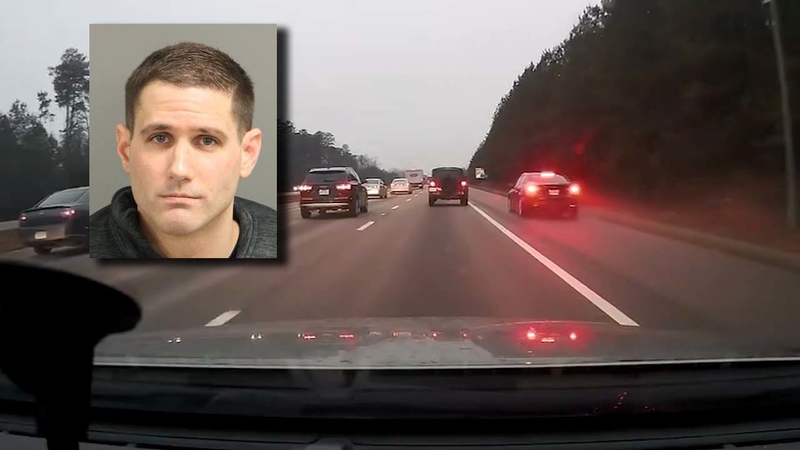 Driver caught on camera passing traffic on I-540 shoulder

RALEIGH, N.C. (WTVD) -- Dash camera footage caught an aggressive driver passing on the right shoulder of Interstate 540 five times in as many months.

A Wake County man said he was driving on the interstate Friday morning when he caught the driver at rush hour.

In the video, a black Ford Fusion passes a couple of cars on the shoulder at high speed and cuts back into traffic.

Then, it pulls back onto the shoulder at the exit ramp to pass a truck that was trying to get off at that ramp.

"This morning due to the conditions I went ahead and called the Highway Patrol. They said they would alert troopers," said the man who captured the footage and wanted to remain anonymous.

He said he first captured the shoulder pass maneuver in early August just days after he installed the camera.

"It passed at a pretty good rate of speed, maybe 20 miles an hour faster than I was going. So I saved the video and didn't really think much of it."

The dashcam owner said he caught the same car on camera doing the same thing two more times in November.

He notified the Highway Patrol of the first four videos and said he called in today's incident.

A Highway Patrol spokesman said the agency is grateful to drivers who send them videos of serious violations.

"That is something that we encourage them to send in to us so we can conduct a sufficient investigation," North Carolina State Highway Patrol spokesperson Sgt. Michael Baker said. "We have made charges off of video footage given to Highway Patrol in past instances."

The owner of the dashcam said he thinks officers can do more.

"I'd love to see more patrols out to get this kind of behavior stopped before someone gets killed. "The possibilities of injury or death are real high with a situation like this," he said, and he added that he will continue to try to catch the car on video in the hopes that the driver will eventually be caught.
Report a correction or typo
Related topics:
trafficraleighreckless drivingdashcam videonorth carolina news
Copyright © 2021 WTVD-TV. All Rights Reserved.
TOP STORIES
Bond denied for teen accused of fatal NC high school shooting
Man stabbed deputy before being shot, killed in Edgecombe County
LATEST: CDC tells states to be ready to vaccinate children
SPONSORED: Big Weather's Big Recipe: Low-cost Steak Sandwich
Boy wins mullet contest, and here's what he did with prize money
COVID-19 blamed in 65% of police deaths since 2020
Show More
Teen in Barnard student murder sentenced to 9 years to life in prison
Bill Clinton remains hospitalized, visited by wife Hillary Clinton
Fully vaccinated foreign visitors can start entering US on Nov. 8
More than 100 employees threaten Raleigh over vaccine mandate
Twins catch COVID after returning to school
More TOP STORIES News